Last time I shared about places to go in Jeju Island. This time I am going to share about the accommodation I stayed there. 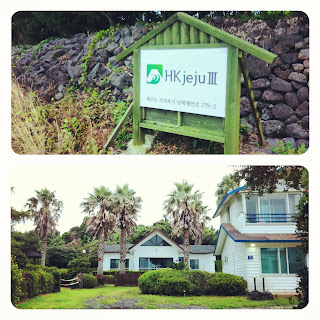 Arrived in Jeju International airport, my first destination was HKJeju III. I took local bus number 100 to Jeju City Bus Terminal, just outside arrival hall. The journey only took about 10 minutes, cost 950won by t-money card, or 1000won by cash. In the bus terminal, I approached one of ticket counters, and asked for bus ticket to Namwon. It cost 2500won. In the ticket it’s written which platform the bus to Namwon is. I went to the back side of terminal where all the buses were waiting, and found my bus. Actually we can just hop into the bus, and pay directly on the bus by tapping t-money card or paying by cash.

When I was inside the bus, I called Tashya, the staff keeper of HKJeju III. She then asked me to pass the phone to the driver, so she could explain to him where I would stop. Actually I knew I should get off in Namwon1-ri stop, but it would be nice if the driver already aware of it. I could sat back, relaxed and enjoyed my first view of Jeju Island in 1 hour. The bus passed by Jeju stones museum, horse ranches, hills and forrest. It was just after raining, made it more peaceful. Hmm I miss Jeju already.

When I arrived in Namwon1-ri stop, I was surprised that Tashya picked me up with her motorcycle. She clearly mentioned in the email that they didn’t offer pick up service, but she picked me up voluntarily. So nice of her. I thought I was going to walk from that stop to the hostel, like said in the website. But I just realized it was far, moreover if walking with a luggage. Thanks God Tashya picked me up. She’s also very friendly and hostile. I spent the night drinking and talking with her about Korean celebrities.

Apparently I was the only guest that night. Isn’t it great to have 1 room alone with a price of 6 bed dorm? :p Everything in the hostel was new. The hostel had just been running since April this year (2 months before my Jeju trip). They also had separate building to be rented as villa or bungalow, perfect for family and group of people. I admit the location was not that convenient for tourist taking public transportation. But if you drive your own vehicle, there’s no problem. It was isolated in the middle of nowhere, I had to walk 20 minutes to go to convenience store. Even though it is located in Seogwipo-si, but it is not in the middle of the city. It took about 30-40 minutes by bus to Seogwipo city.

In the other hand, the location made it feels peaceful. It was very silent at night, I could only hear the sound of the sea wave. This was the view just in front of the hostel. 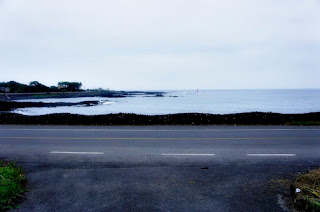 On my third day in Jeju, I packed my things and moved to HKJeju II in Jeju-si.

So different with previous hostel, HKJeju II is located in the middle of Jeju city near Dongmun Traditional Market, Seomun Market and Jun-gang Underground Shopping Center, which was crowded and more life. There were many bus stops around this hostel, made it a really convenient place to stay and go around. It was only 10 minutes away from Jeju City Bus Terminal and Jeju International Airport.There were many banks around this hostel, in case you run out of cash.

Same like previous hostel, HKJeju II was also newly opened. I was surprised to find out the hostel had 5 or 6 floors with elevator, and I got a bed in 8 bed female dorm with bathroom inside. In the basement, there was a cozy bar and kitchen. Soon they would have the performance stage too. Awesome! And it was only 13,000won per night. I thought it was already cheap, but then I talked with one of my roommates, she told me she bought a promotion voucher from Coupang or other discount website to stay in this new hostel for only 8000won per person per night. Not only dorm, they also have private rooms.

I really recommend HKJeju II. Looking back to my posting about recommendation places in Jeju, those places can be accessed easily from HKJeju II. HKJeju III is also nice, but only if you drive a car.

[Update March 2016]
It looks like HKJeju III is already closed, and HKJeju II has already changed its name into The Forest Hostel.

6 thoughts on “Accommodation in Jeju Island”