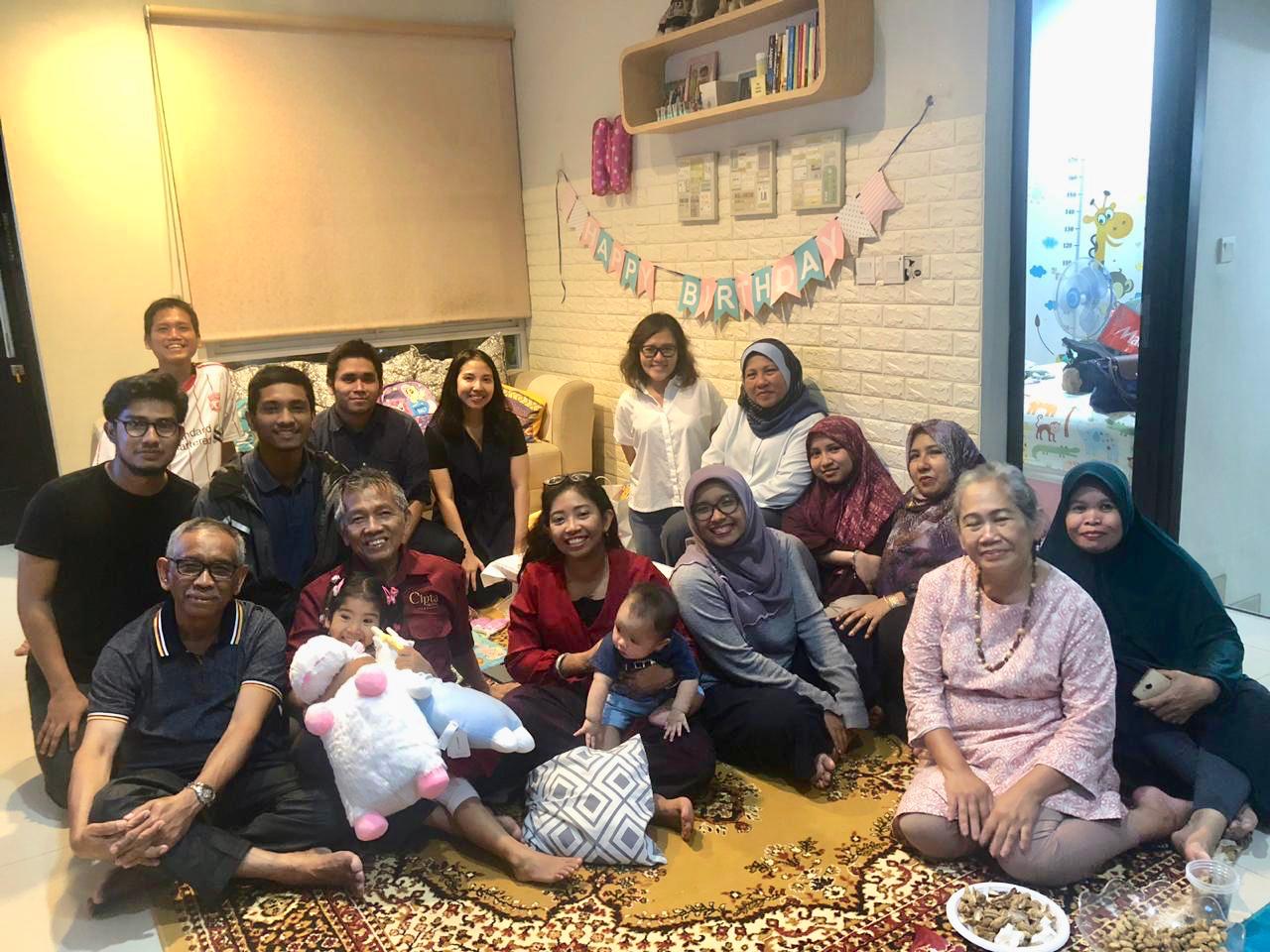 In the first three weeks, I was busy finishing my dissertation. Although I was already in Indonesia, my study hadn’t ended yet. I could focus on studying even better at home because of the available support systems around me. For example, my parents often delivered us delicious homemade meals or I could order it online at a very affordable price, so I did not have to cook. My parents also sometimes brought Nadya to play at their house so I could be alone and have me-time. At night, Nadya always could not sleep because of her allergic eczema skin which was getting worse during the Summer season in the UK and made me really stressful, and now my husband was in charge of taking care of that. Because of all this helps, I could breathe and relax a little bit. On 3rd September 7pm Jakarta time, I submitted my dissertation through the University of Sussex Canvas (an online course management system). I thought I would be excited and jumping hooray right after that, but no, I was dumbfounded and staring blankly at my laptop. That’s it? All the hard work I made in the last one year had finished? My eyes were teary, and I hugged my husband and my daughter. I was happy and sad at the same time.

Parallel with writing my thesis, I did schools-hunting for Nadya. In the UK, school starts at the beginning of September and ends at the end of July. That’s why I was waiting for her term ended first before flying back to Indonesia at the beginning of August. I also planned for her to have one month break and then start school again in Indonesia from the beginning of September following her English friends. That means 1.5 months later than Indonesian schools’ starting date because here they start in the middle of July and end in the middle of June. That’s totally fine. My criteria for her kindergarten school were: (1) English environment, (2) close to home, (3) not too expensive, (4) large garden or play area, and (5) combined with primary school so Nadya would go to the same school for her elementary years starting next year. The first 3 characteristics were also the principles I set while searching for Nadya’s nursery school 3 years ago, but now I had 2 additional prerequisites after experiencing Nadya’s school in England. The last point was also important because then I did not need to take another round of survey for her primary school. Parents already start registering their children’s school one year before! After visiting 8 schools located around 5 KMs range from home (some of them were visited twice!), we finally decided our favorite. On the first day, she was a little bit reluctant to go in, but once she got in the class, she wanted to follow along shyly. The next day she blended in perfectly without any drama. Not like one year ago in Brighton, she had temper tantrums at school for the first full week: screaming, crying, kicking and hitting. I guess now that she is older and has survived a scarier situation (being placed in a totally strange environment without anyone could speak her language and she could not speak the others’ language), she can face and adapt to any challenges easily. It’s been 2 weeks since Nadya started her new school, and she seems to be enjoying it.

After submitting the dissertation and finding Nadya’s school, the next thing to worry about (other than “what am I going to do next in my life?!”) was Nadya’s genetic skin issue. She’s already had this problem since 3 years ago and we have visited several doctors. Usually, she felt itchy in the back of her knees and elbows, especially in the evening. When we moved to England in the Autumn season, the itchy skin was miraculously gone. However, since the Spring season started in April, her eczema was getting worse, even worse than before coming to the UK. The rash was not only on her knees and elbows but also upper thighs, upper hands, neck, and back. We had visited the GP (general practitioner, or medical doctor) but it did not help. She kept scratching her skin unconsciously with her nails until bleeding even though I begged her to please stop. I could not scratch and watch her 24 hours (“I need to work on my thesis!!” while crying literally almost every day). One time she even got skin irritation and fever because of it. After 5 days back in Indonesia, we went to a Pediatrician specialised in allergy. Not like the other doctors we’ve visited in the last 3 years who pointed the weather as the problem’s trigger, he mentioned about food ingredients to avoid. Nadya was already a picky eater and now she had to stop eating chicken, egg, chocolate, cheese, mayonnaise, and ketchup… all her favorites! I was not creative at cooking, so I was really confused about what kind of meals to prepare for her. Moreover, I was still working on my thesis! As a result, we could not follow 100% the diet that Nadya should have and her skin was not improving (but at least not worse than what she had in the UK). After submitting my thesis, we visited a Dermatologist who gave us two prescription creams for the skin and one medicine syrup to drink. Thank God, with this last treatment and keeping Nadya not to eat the sources of her allergy (chicken, etc), she is getting better and we all can have the peaceful sleep.

Additionally, in the last few weeks here I did a lot of house chores including tidying up and decorating. We stopped hiring a helper to clean up our house since I moved to the UK. Now that I have moved back here, I still do not want to hire a helper yet, at least until I get a job. Parents in Brighton inspired me to take care of the house (and kids) without a helper, while having jobs too! This house is 5 year olds that we’ve built and polished since the beginning of our marriage. I missed taking care of it and spending time in a bigger space like this. Having been living in a small one-bedroom flat for 9 months, being in a two-story house now is lavish. I love staying at home and not going out. I only went out for grocery shopping, Nadya’s school errands, visiting my family, and meeting with a few friends. Maybe that’s one of the reasons why I did not feel culture shock: I did not really spend much time facing the chaotic city of Jakarta. Nadya and I also missed the things that we left and did not bring along with us to the UK, such as toys and books. In Brighton, she only had limited soft dolls with her: a pony and a puppy, which she loved, carried them everywhere and hugged them during sleep. Now that she had a lot of dolls, she played with all of them, did not have any favorite and did not sleep with any of them anymore. Poor pony and puppy!

Sometimes I showed Nadya our pictures in the UK, so she would keep remembering that journey. Of course, we miss all the beautiful places we’ve been, the nice people we’ve met and the cool things we’ve experienced in England, but life must go on. Getting busy with finishing the dissertation, Nadya’s school hunting, Nadya skin problem and house chores helped keep me away from the melancholy feeling of thinking about England. Staying away from the city traffic for a while was also good to beat the reverse culture shock. At least for now, I feel so relieved and glad to be back home.