Since I believed that a birthday should be spent well by traveling, I and the family went holiday to Lembang in North Bandung on my birthday last October. We spent 2 days 1 night all in Lembang, so the title of this post should be Birthday Bash in Lembang but let’s use Bandung to make it all start with B.

Bandung especially Lembang is a favorite holiday place for Jakartans. More and more Jakartans coming to Bandung for only weekend getaways, or even one day trip since it’s easily reachable by toll road. When no traffic, it takes only 2 hours to go to Bandung. Same amount of time with one way commuting time of urban people going to work in Jakarta, right? But because of too many Jakartans going to Bandung nowadays, toll road is sometimes jammed, and Bandung city is often full with B plate cars (Jakarta car license plate) during weekend. My car was one of them on last 8th-9th October.

We started going out of house early morning around 5.30am to avoid congestion in Cipularang toll road, and arrived in Lembang around 8am. We had a heavy breakfast in Saung Pengkolan 1. Why the number? Because there are 3 locations of Saung Pengkolan restaurant around Lembang. In Sundanese, Saung means house, and Pengkolan means turn/curve. Like its name, this first branch is located on a curved road, with a nice valley view. The restaurant is quite big with Lesehan (sitting on the floor) and seating options and many variants of Sundanese foods, plus Rabbit Satay, a specialty food of Lembang. 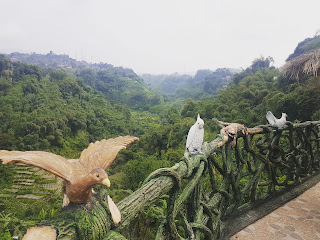 From Saung Pengkolan 1, we went further up passing by Farmhouse, a family recreation that was happening right now. But we did not stop there that morning, because my our primary destination to Lembang, the place I have been wanting to see since Petualangan Sherina movie 16 years ago (I guess it was the same reason with many other people), was Bosscha Observatory. I spent my university life 4.5 years in Bandung but still hadn’t had a chance to visit it until now.

The turn from Jl. Raya Lembang to Jl. Peneropong Bintang, the road to Bosscha (read: Boska), was quite small and easily unnoticed. We missed it, so we turned around and passed by smaller street that emerged to Jl. Peneropong Bintang. Bosscha is opened for public from Monday to Saturday, but available for personal/family visit only on Saturday from 9am to 1pm. On weekdays, it is only for group visits from schools or organizations. When we went there last October, the tour has few sessions and we took session 11am to 12.30pm with admission fee Rp.15,000/person. We arrived there around 10.30am so we still got 30 minutes to kill before our tour started. It was not difficult to kill the time in this beautiful complex, we spent it by taking a lot of photos around the most iconic building in Bosscha. 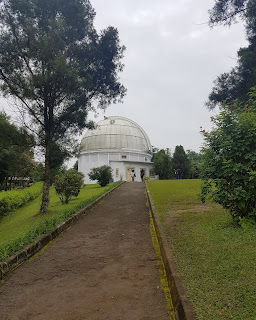 Koepel at Bosscha Observatory
At 11am, the staff opened that iconic building and asked all the waiting participants to come inside. We stood around the circle floor facing a giant telescope called Zeiss Double Refractor. Here we listened to a staff explaining all about Bosscha and that specific telescope. The iconic building where Zeiss telescope kept is called Koepel, a Dutch word means dome. No wonder, because the roof shaped in half ball like a dome. This dome can rotate and open according to where the telescope aims. The floor where telescope viewer/observer stand can also be elevated up and down to telescope height level. Too bad it started raining outside, even though only drizzling but it could harm the telescope, so they could not demonstrate to us how the dome opened. From Koepel, we went outside to another building to see a presentation by an Astronomy student of ITB (my beloved Bandung Institute of Technology). As you know, this observatory is managed by and part of ITB. The student explained us more about Bosscha and astronomy in general. When first time this place was built, it was a perfect place to see stars and skies. However nowadays it is more difficult because the surrounding is getting more crowded by housing and resorts. There were other telescopes in Bosscha, like The Schmidt and Bamberg Refractor, each has their own tasks like observing planets or stars or galaxy, but we were not allowed to see them. Overall I was really satisfied on finally visiting this remarkable Observatory.
Our next stop was Rumah Sosis (House of Sausage), only 1.8km (7 minutes) from Bosscha. It was used to be a family recreation area, but now not so good anymore, only left food court, sausage supermarket and a factory outlet. Since we had a big breakfast before, we just ate snacks like Siomay (fish dumpling), bought some packs of sausages and milks which were famous in Lembang.
Then we went further up to another newer recreation park called De’Ranch, about 2km (10 minutes) from Rumah Sosis. Children will love this cowboy styled place so much because there are many fun games such as playground, riding horse, feeding cows, fishing, etc. Admission fee is Rp.10,000/person (get free milk) but not including activities tickets which can be purchased inside and range around Rp.20,000-Rp.25,000/game. We bought fishing game ticket for my kid to play magnet fishing for about 30 minutes, watched cows being fed, let my kid play in the playground and had some more snacks while enjoying wonderful scenery. 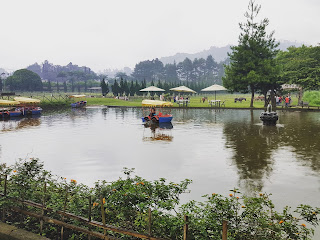 Rainy day in De’Ranch
Around 4pm we went out from De’Ranch to check-in to our hotel Sapu Lidi Resort. After resting a little bit until sunset (Maghrib), we went out again at 6.30pm for dinner in The Peak Resort Dining. It is a REALLY nice chic restaurant on the hill that offers local and western foods. Too bad it was raining outside so we could not see the beautiful night view of valley and housing below, even though we were sitting beside the window. However it was still very romantic to have a Birthday dinner there. Thank you, Hubby!
The next day after checked-out from hotel, we went to a new kid recreation place inside the same housing complex Graha Puspa where our hotel located, just 1km. It’s called Jendela Alam (Window of Nature). Soon after we got in, I understood what about its name; many activities inside were related to nature. There were many kinds of plants and animals along with their description. When we passed by reptile session, a big snake was just laying on the ground freely without cage, and (they said) it was safe, oh my God! Other games are also there, such as flying foxes, challenging ropes, swimming, animal feeding, riding horse and so on. We did not have a good time there because my kid was a little bit cranky. It was my fault tho. We purchased mini train ticket for her and let her ride it by herself alone, without me and my husband, even without other kids too (since it was still morning and not crowded). It was not big, really, and we were standing very close to her but still she was afraid and crying (especially when the train passing by short tunnel). The staff said I could sit in the train also to accompany her but she screamed and did not want to take the train anymore. We directly took her off from the train just after 2 turns. The staff gave us back my ticket and said we could take the ride again later when she was ‘recovered’. But yeah, she was not easily recovered. Before taking the mini train, I also purchased mini ropes ticket for her, it’s a challenging game like walking on the bridge then climbing rocks and so on until finish line. Since she was already cranky, she did not want to play that either. In the end our tickets were wasted. However she seemed enjoying the playground and watching animals around. This place was good for kids education to nature, but not yet suitable for kids age 2-3 years like my child. When other recreation parks in Lembang give free milks, this place gives free vegetable seeds per ticket. I chose spinach and water spinach (kangkong). Entrance fee is Rp.20,000/person, and like other parks, it does not include games tickets inside. 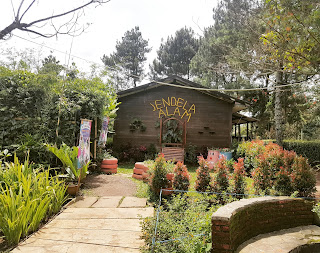 Jendela Alam
Around 11am we headed to Burgundy Wine and Dine for pretty lunch. Why pretty lunch, because the place is sooooo pretty! It was a semi outdoor restaurant with big yard around on top of hill facing valleys and other hills, perfect place for a wedding venue. The decorations are also cute such as shabby bicycles and bird cages. It serves western foods and tastes delicious too, maybe mostly because of the view. 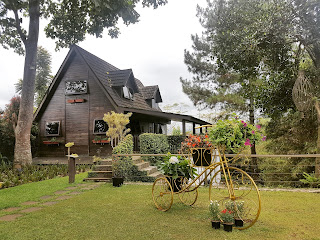 Burgundy Dine and Wine
After that we went to Maribaya Natural Hot Spring Resort, about 1.5km (5 minutes) from Burgundy. It was an old place but just renovated into a great recreation area. The carpark in front of main gate is quite small and limited but there is additional bigger carpark not too faraway where we can walk or take the provided free shuttle bus. Entrance fee is Rp.35,000/person (free mineral bottle) not including the activities inside (as always). There are 2 waterfalls in this resort called Curug Cikawari and Curug Cigulung that are quite refreshing but not that high. Some cafes and restaurants are built beside the river so customers can eat with the waterfalls view. Like the resort name, there are some hot springs inside where we can dive and bath. Also, Love Locks is everywhere now, including in this resort, where couple craft their name in locks and hope their relationship will last forever. As couple with toddler, we were more interested in purchasing ticket for our kid to have fun in the playground with slide and tunnel. Soon raining started, and we rushed to hobbit house first to snap 1-2 pictures before went out from this place. 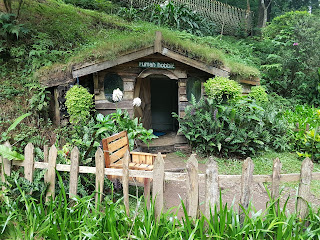 Hobbit House at Maribaya Natural Hot Spring Resort
It was around 2.30pm and time to finish our Lembang trip. Not like yesterday morning drive, the journey from Lembang back to Jakarta on Sunday afternoon was quite heavy traffic that took us around 6 hours. Nevertheless, I really had a good time and blessed birthday in Lembang.

Read also my review of the hotel we stayed in Lembang during this trip.

2 thoughts on “Birthday Bash in Bandung”