It was so exhausting for me the day before, so we decided to make today mooooore relax haha. We went out from hotel quite late around 10am. We stopped by the only travel agent we found in Saladaeng Road near our hotel, asking about Siam Niramit show for tonight and one day tour to Ayuttaya for tomorrow. Since we didn’t know where other travel agents were around there, we decided to take their service. We paid 1000 Baht ($31) each for Siam Niramit show, and 1250 Baht ($38.5) each for Ayuttaya tour. I know from my friend Elfira, that was a normal price for Siam Niramit show. So I trusted they didn’t scam me with Ayuttaya tour either. Hell no, the next day we found out we paid too much overprice for Ayuttaya tour. I will write more detail on the next post.

After dealing with travel agent, and having Thai foods for lunch in one of local food stalls near Saladaeng BTS Station, we took BTS towards Saphan Thaksin BTS Station and transferred to Sathorn/Central Pier of Chao Phraya Express Boat. Today we would take the water transport to visit Grand Palace and Wat Pho. The nearest pier to Grand Palace was Tha Chang (N9). Taking river boat is not as easy as taking BTS and MRT. When we arrived in Sathorn Pier, we followed the crowd, and approached a lady that went around the crowd who seemed in charge of the ticket. We said “Tha Chang” to her, and she gave us 2 tickets, “30 Baht for 2”. Not long after that, the orange flag boat came and we boarded it. 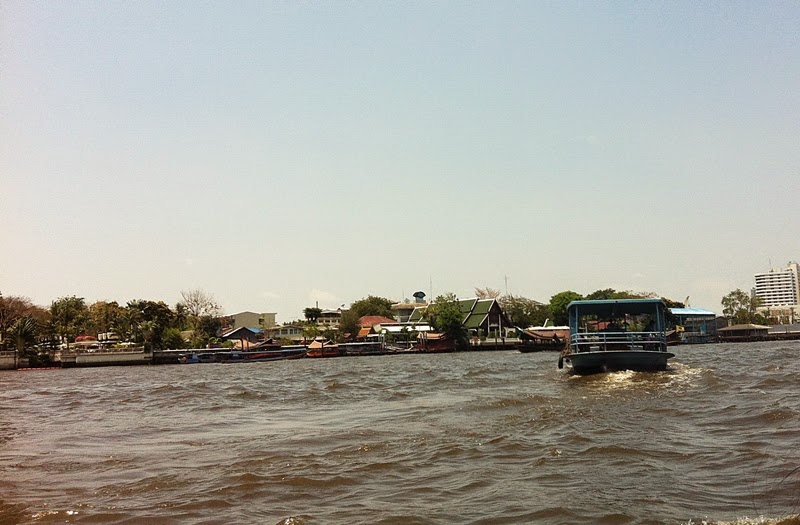 We got seat in the center of the boat. There’s no announcement on each stop. After few stops, somehow we heard the boat lady shouted “Tha Chang!” We hurriedly went to the back of the boat, but too late, the boat suddenly started to sail again. It was very quick, they didn’t give us time to alight. There were other 7 people who missed the stop like us. The lady then said we could alight on the next stop, Wang Lang (N10), and take Cross-river ferry back to Tha Chang. For that, we had to pay another 3 Baht per person. 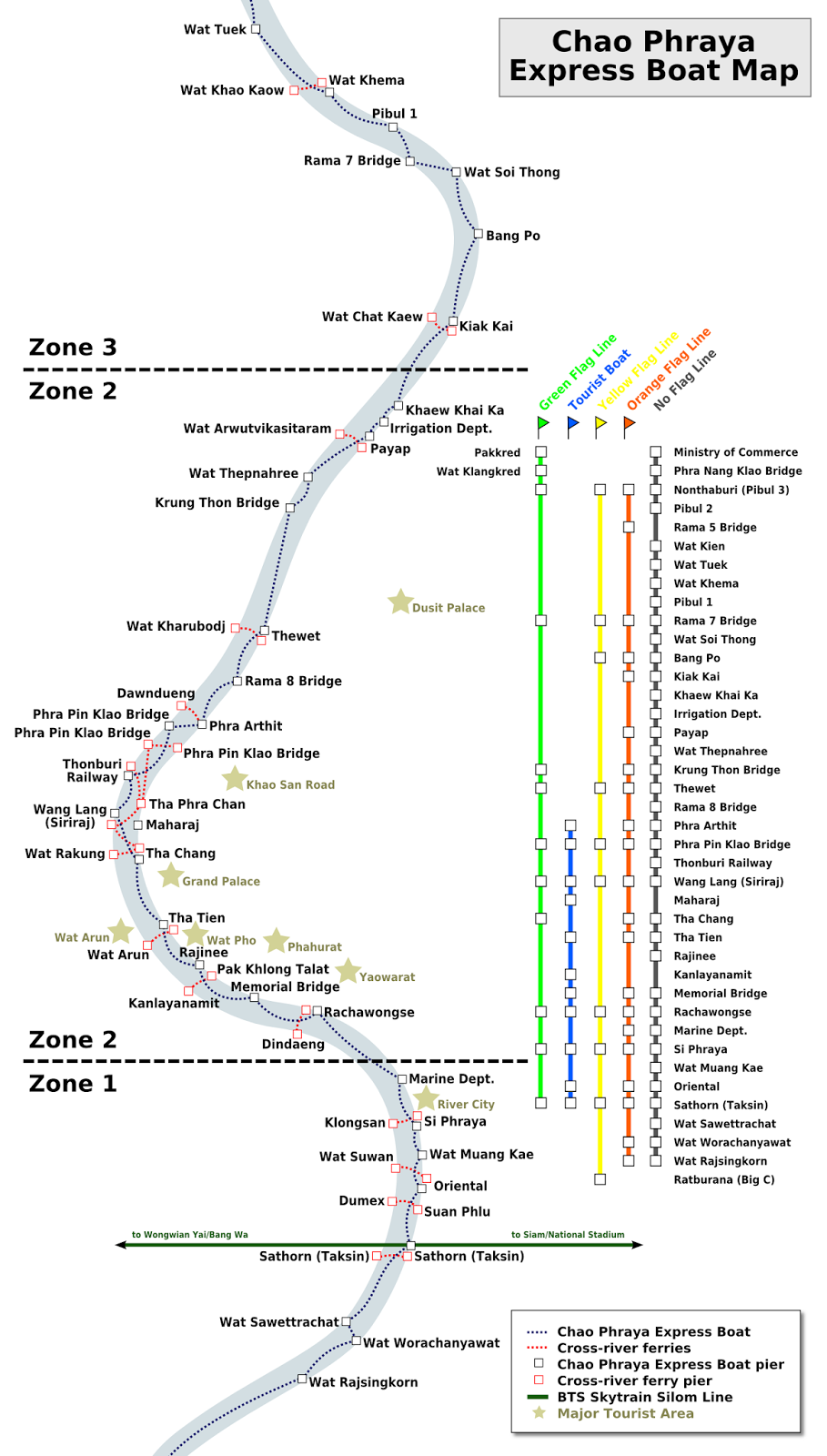 Arrived safely in Tha Chang, we followed the sign to Grand Palace. For 500 Baht ($15.5) per person we could walk around this big complex including admission to Queen Sirikit Textile Museum. To get inside you have to wear shoes and appropriate clothes. However if you happened to wear shorts and tank-top, you could borrow shawl there. When we just walked in the ticket gate of the palace, it was almost 1.30pm. I read an announcement about free English guide tour at 1.30pm, and directly signed our names on it. It was a really right decision! The tour was informative and enjoyable, and the tour guide was really funny!

The tour started from demon statues near the ticket gate. There is a tale in Thailand, about a princess who’s kidnapped by a demon. To get her back, the kingdom asks help from super monkeys in mythical forest. That’s why around this palace, there are many statues and paintings of mythical creatures. Moving to the Upper Terrace, we can see the Sri Lankan Style Golden Chedi, miniature of Angkor Wat (that has been under control of Siamese/Thai long ago), a colorful Chinese building and Kings’ stamp surrounded by elephant guard statues (each King has their own stamp, and each elephant guard statue has their own long name). 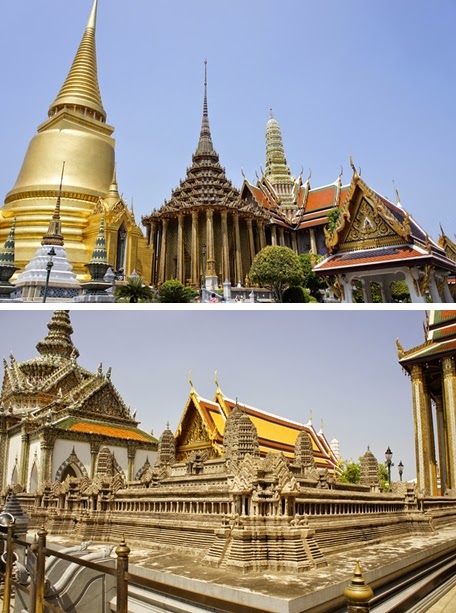 Sri Lankan Style Chedi (above), and Miniature of Angkor Wat (below)

From Upper Terrace, we walked to Royal Monastery of Emerald Buddha. The sacred image of this Buddha is carved in a green jade. It is given a costume based on 3 seasons: summer, rainy and winter. The costumes are changed 3 times a year in a ceremony presided over by His Majesty the King.

From the Buddha temple, we walked to the gate of Borom Phiman Mansion. It is used as the Royal Guest House for visiting Heads of States and guests of Their Majesties. We couldn’t get inside but only to look from afar. The building has French style that looked like Palace of Versailles. The tour guide also pointed a building faraway behind it which is now being used by Princess, the first daughter of the current King, who actually has already given up her title as princess because of her marriage with an American. The tour guide also told story about the princess’s son who died young during Tsunami 2014 when they’re having holiday in a resort in Khao Lak. So sad 🙁

From there, we walked to Amarinda Winitchai, a building in Chinese style which serves as banquet hall. After that, we went to Chakri Maha Prasat, a mix European-Thai building which has a body resembles Buckingham Palace and a Thai style rooftop, serves for the reception of foreign ambassadors. 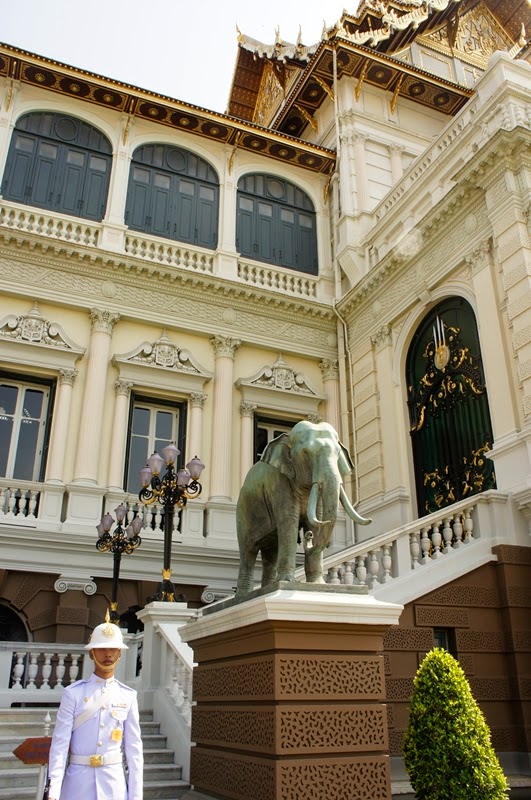 Do you see the pattern? A Sri Lankan Style Chedi, a Chinese hall, a French mansion, and an England building. Many buildings in palace are influenced by foreign styles. They said it’s because the Kings want to impress the foreigners that they can also build such kind of things.

It was 3pm already, and we managed to get inside Queen Sirikit Textile Museum before it’s closed at 3.30pm. Queen Sirikit is the current Queen of Thailand. This museum displays the dresses and costumes of the Queen during royal events. Especially when she’s going oversea, she’d like to wear dresses made of Thai Silks to introduce them to the world.

Enough with the palace, we moved to a temple not far from there: Wat Pho, or the Temple of Reclining Buddha. We took Tuk Tuk for 50 Baht ($1.5). There are also another options: walking (about 20 minutes), or taking river boat to Tha Thien Pier (N8), just 1 stop from Tha Chang Pier. The admission fee to Wat Pho was 200 Baht ($6) per person including 1 bottle of mineral water. This temple is famous for its reclining Buddha inside. 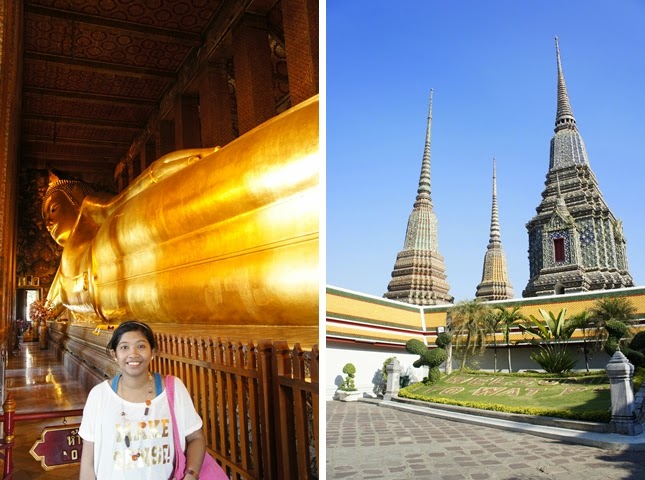 Wat Pho
There are a lot of other interesting places in this part of old Bangkok city (such as Chinatown, Asiatique, Wat Arun and other temples), but we couldn’t visit all of them. Now it’s time for Siam Niramit show! The free shuttle bus is provided from Thai Cultural Center MRT Station. From Wat Pho we had to take 3 kinds of transportation: river boat from Tha Thien Pier back to Sathorn Pier, BTS from Saphan Taksin Station to Saladaeng Station, MRT from Silom Station to Thai Cultural Center Station.
We boarded a boat in Tha Thien Pier after we asked “Sathorn?” and they said yes. We didn’t check again, and just sat comfortably. During the journey, there was a lady in microphone talking in English explaining places around the river we’re passing. Hmmm something’s wrong, there was no tour guide like this in the boat we took before from Sathorn to Tha Chang. Apparently we boarded a Tourist boat, and had to pay 40 Baht each. It’s more than doubled our previous trip, and we even didn’t need that short guide tour! River boat transportation is certainly not for us, we missed the stop when we headed to Grand Palace, and then took a wrong boat when we went back.
From Saladaeng BTS Station, we had a quick dinner first on the way to Silom MRT Station. We stayed in the hotel around this place so we’re quite familiar with the shops there.
When we went out Thai Cultural Center MRT Station Exit 1, the shuttle bus was already waiting there in the bus stop, you wouldn’t miss it. The shuttle bus from MRT is available from 5.30pm and comes every 15 minutes (depends on the traffic). It would take about 10 minutes to go to Siam Niramit show place. When we arrived there, first we changed the printed tickets we got from the travel agent to the show tickets with the seat number on it. The show itself starts at 8pm, but we can watch some local performance or ride an elephant in Thai Village on the yard outside the hall. Taking pictures are not allowed during the show, all the cameras must be deposited before entering the hall.

The show was entertaining!! It started with the Royal Anthem to His Majesty the King, to which all audience should stand. Then the show begins with the scene of Lanna Kingdom, which centered in the present-day northern of Thailand, where Chiang Mai and Chiang Rai are now located. There’s also the scene that pictured how Siamese and Chinese made friendly trades, the scene of mythical creatures in mythical forest, the scene of peaceful village with rice fields, and many more I can’t remember hehe. The change between each scene was so quick, neat and professional. Some trained animals were also on stage like elephants, chickens and goats! One of my favorite parts was when suddenly there’s a river on stage! The performers also interacted with the audience. It was so enjoyable, worth every penny!

That concludes our cultural day in Bangkok.