Back in Malang after 2 nights staying in Batu, we stayed to explore the city for one night. From Jatim Park 2 Batu, I ordered taxi to bring us getting our stuff first in our hotel in Batu, then went we off to our hotel in Malang. The journey takes about 45 minutes. After checked-in and got a rest for a while, we went out to have dinner… in 2 places!

First we went to Toko Oen, an old restaurant in Dutch style that was started since 1930. The furniture inside really pictured the old times such as low chairs made of rottan, plaid table cloth in red and white and Welcome plank in Dutch.The waiters wore a costume used by local people during Dutch invasion. The menu written in Bahasa Indonesia and Dutch. We ordered its specialty ice cream and Oxtongue Steak. Ice cream price varied between 13k to 30k, while steak price ranged between 60k to 70k.There were also other foods such as appetizers and Indonesian dishes. Please note that this restaurant also served pork, so it’s not halal. They served quite long and not too friendly, but the Oxtongue Steak was nice tho.

Toko Oen is located near Alun-Alun Merdeka. After spending such a fun time in Alun-Alun Batu the other night, I thought we would visit Alun-Alun Malang right after we had dinner in Toko Oen. But when we passed by it, it was dark and quiet, not as crowded and live like the one in Batu. Maybe it was crowded only in weekends and on the day, not in the evening. Hmm didn’t know what to do in Malang at night accept dining (and clubbing?). OK then, we went eating again!

For this second round dinner, we had meatball in Bakso Bakar Pahlawan Trip. Bakso (meatball) dishes are very famous in Malang. There are many Bakso restaurants in Malang, we chose here because it’s a recommendation of a friend and located near our hotel. The specialty food here of course its Bakso Bakar (grilled meatball). I liked it, I even bought 3 packs of frozen Bakso Bakar to bring home to Jakarta. The restaurant is semi outdoor where people sit on the terrace and front yard of somebody’s house. It felt homey and cozy. It was located near Tugu Pahlawan Trip in a quiet big road, so it was kinda difficult to find and hail a taxi on the street. We finally got a taxi after I made a call order, then we went back to hotel to get rest. 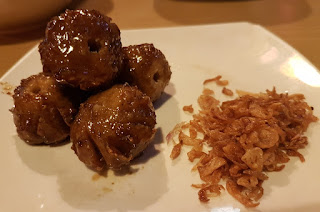 The next day was the independence day of Indonesia. The hotel we stayed held a small race party to celebrate it in the pool. We had a long time swimming and having breakfast by the pool, but did not join the race. Around 10am we went to Museum Tempo Doeloe, a museum displaying Malang city and around in the old times. There are dioramas of Singhasari Kingdom, one of well known Javanese kingdoms around year 1200 located in current Malang city. There are pictures of old Malang during Dutch and Japanese invasion, also displays of East Javanese furnitures and dresses. Honestly not much to see in that museum, so 25k entrance fee is not too worth it. It should have been free on Independence Day, like in Singapore. 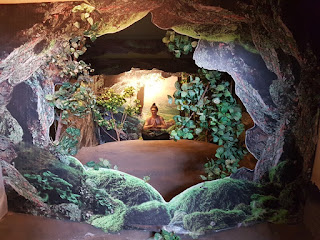 Ken Arok figure at Museum Tempo Doeloe, the founder and first ruler of Singhasari Kingdom
An old styled traditional restaurant right beside the museum was more interesting than the museum itself. It’s called Rumah Makan Inggil. The walls are full of wayang masks and old pictures. There is a main stage on the back side of restaurant filled with traditional music instruments. Maybe they have some Javanese music performance in the evening. They serve Javanese foods, snacks and drinks like Fried Chicken with chili sauce, Fried Banana, Jamu (traditional herbal) and Wedang Ronde (some kinds of ginger drink). Since we had big breakfast in the hotel before, we did not eat much here, instead we packed some snacks to eat in the airport/plane later in the afternoon. In front of the restaurant, there is a souvenir shop. So basically it was one stop for all: sightseeing, dining and shopping. 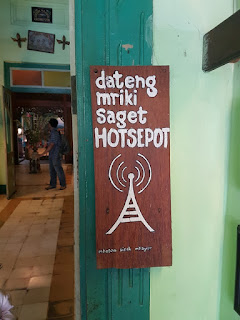 If Toko Oen near Alun-Alun Merdeka, Rumah Makan Inggril is near Alun-Alun Tugu. Apparently Malang has 2 Alun-Alun (large central open lawn square). Alun-Alun Merdeka has a square shape while Alun-Alun Tugu has a circle shape (that’s why it’s also called Alun-Alun Bundar, Bundar means circle). Both looked refreshing with big green trees and beautiful flowers, but both were quiet when I passed them by. Maybe people only go there in the weekends morning or afternoon.

Around 1pm, time to go home back to Jakarta. I ordered taxi to pick us in the restaurant. While in Malang since last night I always used local taxi. In my opinion Malang taxi is less reliable than taxis in Batu. As I know, there was only 1 taxi company in Batu, but 4 taxi companies in Malang. In Batu we always used Taxi Citra Kendedes Batu (+62341599599). My calls were always fast accepted, and the taxi came rightaway. While in Malang, I noted these 4 taxis: Taxi Citra Kendedes Malang (+62341404040), Taxi Argo Perdana (+62341488888), Taxi Bima (+62341717171) and Taxi Mandala (+62341474747). Based on my experience, Taxi Citra Kendedes and Argo Perdana are the best, but sometimes they did not accept the calls. There was one time my calls did not go through those two taxi companies for few minutes (always busy/on-line) that I decided to call the other taxis. Then Taxi Mandala came to pick us up with an old and smelly car. Eugh, never ever called them again. 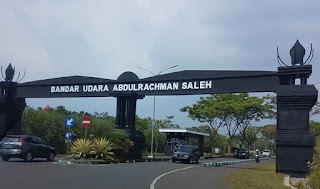 Malang Airport
From Rumah Makan Inggil, we picked up our luggage in the hotel lobby before finally went off to Abdul Rachman Saleh Airport. That was the end of our tour around East Java. Well it was only 3 main cities but hoping we could visit another cities and regencies in the future. 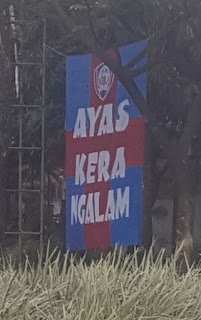 Malang people tend saying things in reverse. AYAS is SAYA, KERA is AREK, NGALAM is MALANG which means I am Malang person