Ahh, Europe on Screen 2014 (EoS 2014) was over. This European film screening is definitely my favorite event of the year. This year they showed 71 movies all for free, for 9 days in 8 cities in Indonesia, including Jakarta. In Jakarta itself, there were 7 venues showing those movies. Of course I couldn’t watch all of them, because they were screened in the same time in different venues, and most movies were screened before 5pm on weekdays (during office hours). In fact, the total movies I could watch in EoS 2014 is only 14 movies. There were many other interesting movies in EoS 2014 I’d love to watch, so I downloaded them from internet. Now I wanna share my experience going to this festival.

About the Venue
Out of 7 venues in Jakarta, I went to 5 of them. I didn’t go to Universitas Tarumanegara (UNTAR) because it’s quite far from my home; neither to Epicentrum XXI because it’s for the Opening Film (Philomena) with invitation only. The 5 venues are:

Going to this place really brings back memory. When I was in the university, I took Italian Language class in my campus in Bandung for about 2 years (but if you asked me now about the language, I’ve forgotten everything). I don’t know how it goes now, but at that time Italian Government was keen to spread Italian Language to universities, so they provided really cheap classes for students to learn Italian Language with a native teacher. Only 100,000 Rupiah (~9 dollars) per semester, can you imagine? Once a year they screened Italian movies in campus, or held a free trip and event to IIC Jakarta.
The room for movie screening was a big class room, with a not-so-big and not-so-high screen in front of the class, and many movable chairs with the same level of floor. So, if you sit in the middle of the room, you can only see the heads of people in front you, and half the screen. I watched several EoS2014 movies here, including my first movie: A Hijacking (Kapringen) from Denmark. It was screened on Sunday 5pm without so many people attending. There was no seat number in the ticket so we could choose any available seats. At that time I got the front seat and watched the movie comfortably. In the same venue, I then continued watching the next movie at 7.30pm: La Grande Belleza (The Great Beauty). This Italian movie had a good rating and won Best Foreign Language Film in Oscar 2014, no wonder there were many people came to watch it. The ticket was finished; many people were in waiting-list. Thirty minutes before the show, people already started queuing to get inside the room. Since I was pregnant, I didn’t join the queue; I sat somewhere else until it’s time to enter.

As expected, I didn’t get the front seats. Before the show I thought I still could watch it through the gap between people in front of me. But when it’s started, since the chairs could be moved, people in front of me pull their seats around so they could have a better view, but in result it made my view blocked. I still could see the top half screen, but not the subtitle on the lower side. For 30 minutes I couldn’t understand the movie, and pissed off when everyone laughing except me. I directly exited the room and went home. My disappointment was added by the chaos made by the committee before the show. They counted how many seats available and let the waiting-list people enter the room according to the available seats. That’s still fine for me, but then suddenly they added more chairs (I don’t know from where), put them in front of the lines and asked the already-seated-people to move backwards. What the hell, the waiting-list people who came late to get the ticket then got the best front seats? The show then started almost 30 minutes late. What a bad management! Since then, I didn’t want to watch an anticipating movie in IIC anymore. One suggestion for the seating like this, how about showing the subtitle on the upper part of the screen?

2. Goethe Haus (GH)
This German cultural center is the venue I like most. It has a big cinema hall with 300 seats in different level of stairs, so your view would not be blocked by people head in front of you. It has a cafetaria opened til night, prayer room, and many toilets. The only lack of this venue is it has really bad 3G signal.

Even though the cinema hall in this Dutch cultural center can fill up to 320 seats (more than GH), but most of the seat lines are on the same level, so you can still see people head in front of you if you’re not sitting in the front of the lines. Other than the cinema, EH also host Open Air Screening (OAS) in the yard. The OAS film was showing everyday at 18.30pm.

4. Institut Francais Indonesia (IFI)
This venue is really small; only contains of 47 seats. So if you want to watch here, better to come very early. I only watched here once, and fortunately I was still able to get the ticket.

This is another OAS venue. The film screening here was held everyday at 19.00pm. I hadn’t been to this park before until EoS2014. This park actually is located hidden behind the more famous Menteng Park. Small but clean, it has many frogs statues around. I only watched here once, because the seats were not too comfortable for pregnant lady.

About the Movie
There were 14 movies I watched during EoS 2014, not including The Great Beauty which I went out after 30 minutes screening. The movies are not particularly setting in Europe; some are not European-style movies at all except that the director is from Europe. These are the movies I watched listed based on my most favorite.

1. Philomena
Looking at the list of EoS 2014 movie title for the first time, I was only familiar with Philomena. This movie got many nominations in the Oscar 2014 last March (but didn’t win any though). It is a true story about an old Irish lady trying to find her lost son for 50 years, based on the book “The Lost Child of Philomena Lee”. Some settings are in USA, but most are in Ireland, with a thick British accent. The movie was really touching and sad, that I couldn’t stop crying. No wonder it was designated as the Opening Film for EoS 2014.

2. The Gilded Cage (La Cage Doree)
This movie is about a hardworking Portugal couple who have lived in France with their family and friends  for a very long time, and suddenly got an inheritance that required them to go and live back in Portugal which was actually their dream. But their family and friends do not want to let them go. It was very funny! The settings and language are most in France/French, but we could see a glimpse of Portugal, Portuguese foods and Portuguese language a bit. Two European cultures in one movie.

3. The Priest’s Children (Svecenikova djeca)
It’s a hard decision to choose which one is better between The Gilded Cage and The Priest’s Children. Both are funny, but The Priest’s Children is more into dark comedy movie. I put The Gilded Cage as no.2 for its colorful and cheerful story. This Priest’s Children movie is telling a story about a young priest who comes to serve on a small island in Croatia. In order to help increase birth rate on the island, he decides to pierce condoms and manipulate the contraception pills before they are sold with the help of a condoms seller and an apothecary. After they abolish all forms of birth control on the entire island, the consequences become tragic and complicated. The language is in Croatian, but there’s not much Croatia scene we can see in the movie.

4. Blancanieves
This is a Spanish movie version of the legendary Snow White. A young girl has a rich father but sick, and a mean stepmother who likes torturing her. Like Snow White story, the stepmother wants to kill her but she was saved by dwarfs. But the end of this movie is a little bit sad. This movie is unique because it’s black and white, and silent. Characters in the movie are talking to each other without voice, but we were given a short explanation after some dialogues. Even though it’s a silent movie, it’s easy to understand (except two idiots sitting behind me who kept talking and discussing their interpretation during the movie).

About the Gift
There were a lot of goodie bags giveaway after the screening of each movie, such as teddy bear, tote bag, bracelet, water bottle, laptop case, tees voucher, and many more. Usually the committee would draw 3 cuts of ticket, and announced the lucky numbers. Other sponsor would ask question and we should answer it by mention them in twitter. If coming early to get the ticket, there was usually free Jakarta Post newspaper to grab. After watching those 14 movies, I got 3 goodie bags from British Council, European Union and Aora TV! *happy for small things :D* 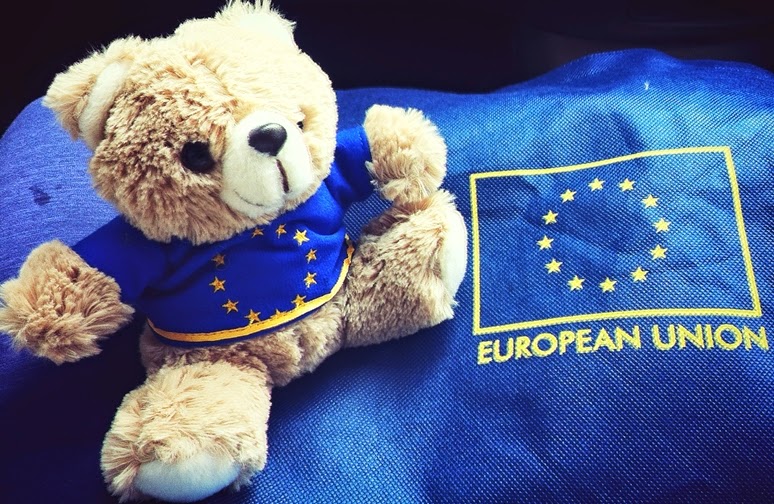 I really enjoyed EoS festival. I am not really into hollywood movies, but I am always fond of Europe; something about Europe always mesmerize me. Looking forward to watch EoS again next year!

previousTasting the Unique Indonesian Foods
nextUber Has Arrived in Jakarta