This was my second time I went to Kuala Lumpur. But not like previous trip by bus from Singapore, this time I was taking flight from Jakarta to Kuala Lumpur International Airport (KLIA) for business trip. My Garuda Indonesia flight was quite empty. There’s not much people traveling at that time maybe because of fasting month. Without being asked, the flight attendants gave a meal box for fasting people to take home. But it’s not the case for every Garuda flight. In other flights, sometimes we need to ask them if you want the packed meals. 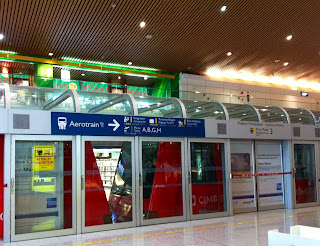 My Garuda stopped at SB, so I needed to take the Aerotrain to MTB to pass the immigration. Before I made my way to immigration, I had to do 2 things: to stop at one of duty free shops to buy a bottle of Baileys Irish Cream for a colleague in Malaysia (one passport can only buy one bottle of alcohol), and to buy a Malaysian prepaid mobile phone number.

For mobile phone number, I approached Digi booth, one of telecom providers in Malaysia. I already knew what I wanted to buy: Best Prepaid card cost RM8.5 with RM5 credit inside, and additional RM15 for 7 days data plan unlimited, total would be RM23.5, cheap right? But the Digi guy said the cheapest prepaid card now cost RM26 with RM15 credit inside. With additional RM15 for data plan, the total would be RM41. RM15 credits was too much, but the guy insisted there’s no cheaper package. I should have bought it in Digi counter after the immigration. Over there, my colleague got the package of RM26 with RM5 credits and 7 days data plan.

From KLIA, I took KLIA Express to go to KL Sentral. It cost RM35 and reached the city in less than 30 minutes. There was another train going to KL Sentral called KLIA Transit. It was cheaper but it stopped in few stops before KL Sentral. From KL Sentral, I took a taxi to Bukit Bintang area. To take a taxi there, one should get the ticket first in the taxi counters, cost RM2. That time there were 2 taxi counters waiting for me: Budget Taxi and Premier Taxi. The budget taxi didn’t have meter but used a flat price. While Premier Taxi used argometer. Of course I opted for Premier Taxi. On that Saturday afternoon, KL traffic was not too different than Jakarta traffic. The taxi cost me RM27 from KL Sentral to Bukit Bintang area where my hostel located.

My business trip to KL was officially started on Sunday and finished on Thursday, but I extended it one night before with my own additional cost. I planned to visit few tourist attractions that I hadn’t been to and to meet a friend. I didn’t need a fancy accommodation, it’s only for sleeping for one night. So, that Saturday I stayed in a cheap hostel near the hotel I would stay for the next 4 days.

The name of the hostel was Irsia Bed and Breakfast. I paid $17 for one night in single room with shared bathroom, including breakfast. Every room door was painted with countries flag. I got a Sweden room. The small room had no window nor aircon, but it had 1 air circulation fan, and 1 cooling fan. It was quite neat and comfy. The location was just beside Berjaya Times Square, so I told my friend to meet there after I finished checking in.

1 thought on “Flying to Kuala Lumpur”