Do you know Kongbubang? It’s a community in Seoul that offers free Korean language classes. For more info, you can see in their website and facebook group page. I never came to their classes again since last year, but they still posted me about new classes and… field trip!

I love field trip. Recently they had a free trip to Hadong Green Tea Festival (one of Spring festivals in Korea), only 35 people or something, and I managed to register myself and my friend. Hadong was located in Gyeongsangnam-do. Do you know where it is? It is far.

Our meeting point was in Seoul Sports Complex subway station. We met a lot of new friends there. Most of the participants were foreigner, only Songsaenims (teachers) are Korean. Some people were not new for me.

We arrived in Hadong around 1.30 PM (5 hours journey!). We had 30 minutes to have lunch. We heard the famous food for green tea was Nokcha Mul Naengmyeon (green tea cold noodle), but we couldn’t find it there. Everywhere only selling Bibimbap. The recommended one was Sanchae Bibimbap (vegetable Bibimbap, without any meat), and it’s the cheapest food in any restaurant, so we ordered that one.

After lunch, we gathered in one place to experience roasting green tea leaves. We split into 3-4 groups, each group circled one table. The guy explained it in Hangugeo (Korean language), but then our Songsaenim translated it to English. We wore farm clothes, and learnt how to mix the leaves inside hot oven, then colded it on the table.

Next agenda was supposed to be tea ceremony, drinking green tea like a King. I don’t know what happened, they canceled it, and we had few minutes free time to explore the festival. There were a lot of stalls selling many kinds of green tea, some other local vegetables, handmade wooden tea filter, green tea cosmetics, and many things. They served us nicely and gave us a lot of free green tea drinks (even though we didn’t buy anything from their stall :P), until I was sick of it haha. All of them was nice, but the nicest thing in that freaking hot day was green tea ice cream! The best! 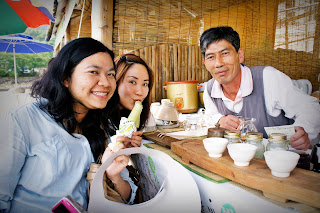 Then it’s time for picking tea leaves in the field. I shared one big basket with 2 other people (one of them was not really interested on picking tea leaves, and sat inside a hut instead haha), to pick only the small leave on the tip of the plant. Later we could take it home, so pick as much as you can haha. I was not interested to bring it home, so I gave all to my friend. The field was on the hill side with a really beautiful view! 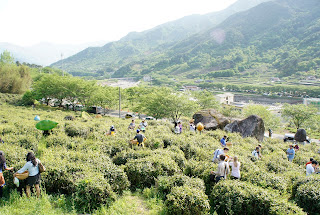 After that we went to Sagye-sa Temple. Walking from the gate to the temple itself took about 15 minutes (for other people should be faster, because we stopped so many times to take pictures xD), in an uphill road, with peaceful small stream on the right side. Because of upcoming Buddha’s Birthday, there were many colorful lanterns around this temple. 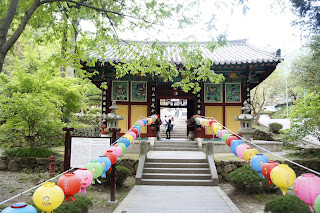 When we finally arrived inside of main temple hall, my friend saw a booth where we can write our wishes on the roof-tile. My friend excitedly approached it and asked the lady a pen and a roof-tile to write. After she finished, the lady suddenly asked for 10,000 won. What the! There was no sign at all in front of the booth saying that this was charged 10,000 won (well, there was no FREE sign either). Some people beside us also got trapped. My friend opened her wallet and she didn’t have any cash, indeed. Ottoke? Then the lady asked us to talk with a Buddhist monk upstairs. My friend, who fortunately can speak Korean very well, explained kindly to one monk, that she didn’t know it was not free in the first place, and she didn’t bring cash money. The monk she talked was really nice (well, I guess all monks are good people) and he talked to the lady and let my friend go without paying. So everyone, if you see piles of roof where we can write on our wishes in a temple, remember that it is not free. 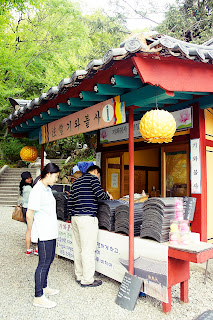 From the temple, we gathered again in the main hall festival to take a group photo. Then they gave us 1 hour free time for sightseeing, but it was 6 PM already, most stalls were closed. Still, me and 2 other friends separated from the group and went sightseeing. We found 2 funny trick eye pictures: Monalisa and King Sejong are pouring tea. We also went inside Green Tea Museum. 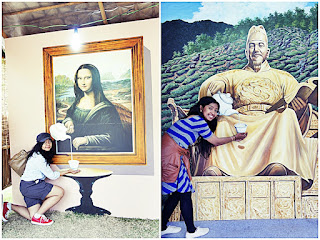 Not too long, somebody from the group called my number asking where was I, and telling me that they’re ready to depart. Whoa.. what?! You said we had 1 hour free time! He said, they changed the plan, and they would go directly back to Seoul right now, so it would be not too late. Well yeah, I didn’t mind to go back earlier, because I knew it would take 4 hours, but why they didn’t inform us earlier?! I felt so bad to be the last one(s) who came back to the bus, while everyone was waiting angrily. It’s not my fault!
Anyway, it was a pleasant journey, and I really enjoyed it! Honestly, if I went all the way there from Seoul by myself, it was not worth it. But if you went there free, like this, it’s really worth it! It was sponsored by Hadong local government, to invite foreigners and to promote this festival and this area in the Southern part of Korea (near Busan, and almost reach Yeosu!). During our roasting tea leaves time, a cameraman recorded and interviewed some of us.
Thank you Kongbubang and Hadong people! 🙂
Tags:HadongKorea