As part of Southeast Asia, Indonesia always teach their children at school with historical of big kingdoms existed before colonizers came, such as Sriwijaya, Majapahit, Pasai, Aceh and Melaka (or Malacca). Pasai Kingdom was located very near my hometown Lhokseumawe, but nothing much left from it. Aceh Kingdom was located in Banda Aceh now, I saw some of its heritages last year in my trip to Banda Aceh. And last weekend I just visited Malacca, which is already announced by UNESCO as world heritage site. It is very nice that Malaysia can keep their historical sites well. Indonesia should learn from them, really, we Indonesia also have, even better and more unique cultural heritages. Be proud! 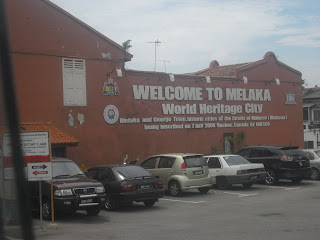 So about my trip, me and friends took bus from Kovan bus terminal, Singapore. It takes 3-4 hours to get Malacca depends on how hectic there in CIQ (Customs, Immigration and Quarantine) of Singapore and Malaysia checkpoints. The bus ended in bus terminal Melaka Sentral. Our inn is located in Jalan Portugis, so we asked some people in terminal which bus to take to get there, and they all gave the same answers, by Bus 17 or Panorama. After we got there, we apparently did not arrive at the hostel area, but at one of tourist spots: Portuguese Settlement (Perkampungan Portugis). We got lost… but it’s OK, at least we had already come to one famous spot 😛 We tried to stop bus like in Indonesia, you know… in random place of the road, not in a particular bus stop (cause we couldn’t find any bus stop nearby!!). Luckily it stopped nyahaha! Yes, Malacca is a small city without too many restrictions, you can alight, board bus and cross the street anywhere. 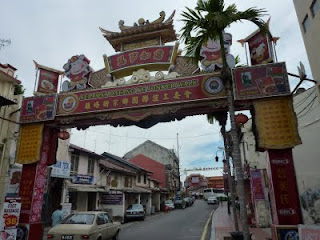 We put our belongings in the guest house, Ringo’s Foyer. I don’t know how my friend found this place (booking fee is only $1.5), it doesn’t look fantastic (yea it’s a backpacker hostel, very cheap, what da ya expect) but the owner (Howard) is very friendly. The place is just a walking distance to the city. We then went looking for foods in Jonker Walk, it’s an antique street full of souvenirs, unique shops and local dishes (reminds me of Braga Bandung and streets in Macau). The street ends with the bridge of Malacca river. From this part, the city of Malacca in past times begins. Malacca Kingdom fell when Portuguese colony under Afonso de Albuquerque sailed and conquered the city on 15th century. On 16th century they were defeated by Dutch. This place is really attractive since many people did commercial trade around Straits of Malacca. Dutch built forts and administrative area which is called Stadhuys means town hall, also named Red Square because of the color. We can find ruins of forts, museums, churches and many historical buildings around this area. 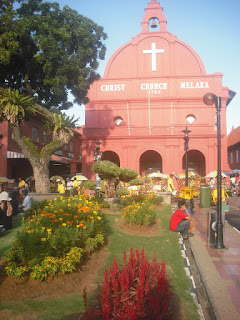 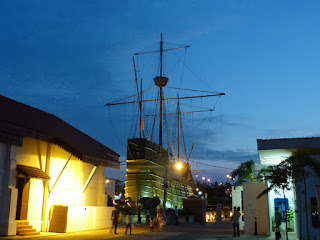 So, will Sriwijaya and Majapahit be my next destinations?!

previousWhere There is Water, There are Chinese
nextTravel Sick