How Lee Seung Gi Gave Me a Friend

It’s all because of Lee Seung Gi. I watched his concert for the first time in Seoul in December 2011. When I exchanged my ticket in ticket counter before the concert, I saw a girl seemed having problem with her ticket. She was alone talking in English to the staff worriedly. Just out of curiosity, I approached her thinking perhaps I could help her (later I know she speaks Korean better than I do :P). Apparently her name in credit card which was used for purchasing the ticket was different than her name in passport, so the staff couldn’t give her ticket. But after talking to the manager, finally they allowed it.

We then had 10 minutes talking to each other before the concert started and before we went to our seat which was faraway from each other. She’s Malaysian traveling to Korea for 1 month at that time, and the concert was a final event in Korea she would attend because the next day she would fly back to Kuala Lumpur. We didn’t take our pictures together, I only asked her to take my picture in front of Lee Seung Gi banner using my phone. We didn’t change our name and contacts, so I was pretty sure we wouldn’t meet each other in the future.

Five months later, still in Korea, I was in a day trip to visit a green tea field in the southern part of Korea. The trip was managed by a Korean Language community in Seoul and participated by about 40 people (mostly foreigners who had attended one of Korean classes in that community), including me and my Indonesian friend. Inside the bus, I and my friend was talking in Bahasa Indonesia when a girl in front of me suddenly greeted us. She heard we’re speaking in Bahasa Indonesia which was similar with Malay and said she’s from Malaysia. We chatted a little bit, then we’re off back to our minds.

I don’t know why suddenly I remembered the girl I met in Lee Seung Gi concert and had the feeling that this was the same girl. But wasn’t that girl already going back to KL? I took the courage to ask her, “hey did you come to Korea last year?” She looked surprised and said yes. I asked again, “Did you watch Lee Seung Gi concert?” We both changed our surprised looks. She was like, “no way, you are that girl!” It’s an amazing coincidence.

Apparently she came to Korea again that year for traveling for another 2 months (how nice!), and homestayed in Korean family VERY NEAR to my officetel! Good thing we met that day and still had 1 month to hang out and do these things together before she went back to KL: eat out few times, go to see Lantern Festival, climb up Bugaksan, travel around Jongno-gu, and watch movie. She even stayed in my place for few days. And of course, we were fangirl-ing Lee Seung Gi all the time xD 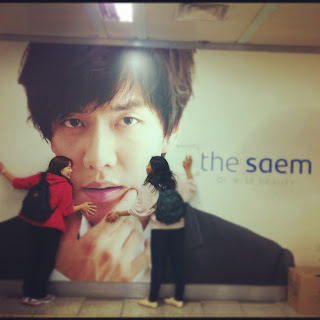 2 thoughts on “How Lee Seung Gi Gave Me a Friend”