Korea has never-ending festivals. They are very creative in making festivals on every season, including winter. On January last year I and my friends went to one of their famous festivals in winter season: Ice Fishing Festival. I was so excited, not just because this was the first time I went fishing, but also because we’re doing it on top of icy river. This festival is also called Sancheono (산천어) Ice Festival, because Sancheoneo (means mount trout) is a kind of fish that we can catch there. This festival is held annually in January, when the river in Hwacheon is really frozen. Hwacheon is one of the cities in Gangwon-do province that is well known as the fastest ice freezing place in the country because of cold valley wind and clear water. 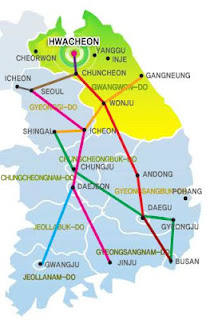 I and my friends went to Hwacheon using public bus from Dong Seoul bus terminal. There was bus every 30-40 minutes, and it took about 2.5 hours to get to Hwacheon Intercity bus terminal. The terminal was just 10 minutes walking distance from the main spot of Sancheono Ice Festival. We looked for a guesthouse or motel to stay in this area. We didn’t book it in advanced, but we could find a cheap good motel there even though it’s a holiday season. 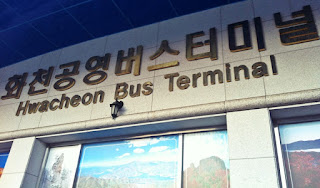 After checked-in and put our stuff, it was already dark. We walked around the festival area to have a look and to find something to eat. The festival was already closed, but the food area was still opened. They had many kinds of alive seafoods ready to cook. We tried one of the stalls there, but it was expensive and not really nice. Only one small fish cost us around 20,000 Won! Later on, we found Lotteria burger not far from the festival area. 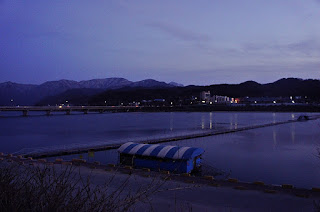 The next morning, we checked out from the motel around 7am and had breakfast in Family Mart convenience store. The festival was opened at 8am, and we wanted to be there already when it’s opened, so it’s not really crowded and we could get a good spot for fishing and catch many fishes! Apparently there was a dedicated fishing spot for foreigners, I don’t know why. The fishing ticket for one person was 8,000 Won, Each of us got a fishing rope and a plastic to put the caught fishes or our small belongings. They provided lockers to put our bags. People could fish there as long as they want, but they could only bring home maximum 4 fishes. The river was thickly frozen and we could walk safely on top of it. There were many holes prepared by the committee where we fished. 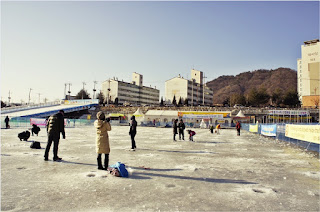 Half a day, four of us already caught 13 fishes in total! We could bake our fish in the oven for 1,000 won per fish, and we ate them for lunch. Much cheaper than ordering fish in the food court. The baking place also offered white rice, veggies, and some drinks to accompany the fish. Yummy! 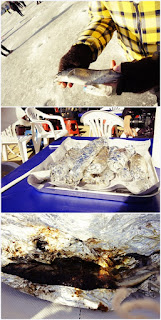 Our catch on the day

After eating, we walked around the festival area that had been full of people. Not only ice fishing, there were many other activities that we could try and see: ice sledding, riding ATV on ice, bare hand fishing, ice sculpture and many more. For bare hand fishing, the participants gathered in a big pool full of Sancheono, caught maximum 3 fishes by their bare hands, and put them inside their t-shirt. It might be so cold! 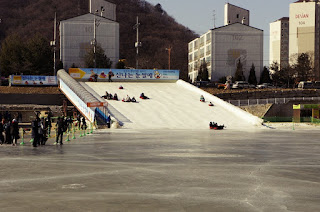 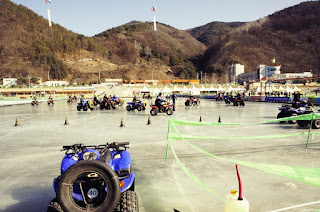 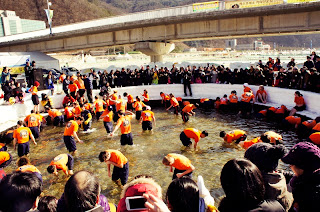 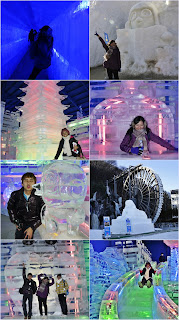 That was the end of our journey in Hwacheon. As you can see in the map, Hwacheon is close to Chuncheon city, only 30 minutes by bus. There were 2 ways of going back to Seoul from Hwacheon: (1) taking direct bus from Hwacheon bus terminal to Dong Seoul bus terminal, (2) taking bus from Hwacheon bus terminal to Chuncheon train station bus stop, then taking train from Chuncheon train station to any subway station in Seoul. Since we hadn’t never visited Chuncheon before (except Nami Island, which is actually located in Chuncheon, but closer to Gapyeong) we decided to take the second way, stay in Chuncheon for one night and explore the city, before going back to Seoul. I will write about Chuncheon trip in another post 😉

2 thoughts on “Ice Festival in Hwacheon”