Am I the only one who’s crying when watching Return music video (MV) for the first time?

I like the MV more than the song itself. ‘Return’ is the new song of Lee Seung Gi (LSG) in his new mini album that came out last month. It became number one in many music charts. Well done, Prince Seung Gi! You made a successful Return. He also appeared in Running Man episode 120 and 121, and Gag Concert shows recently. He is also election ambassador for last week Presidential Election in South Korea. I wish I was in Korea at that time, because there were many banners and posters of him in the whole country haha. Rumors say his new drama will also air soon. So excited!

It has been 2 year, and I am still a big fan of him. I didn’t come to his Hope Concert (it’s still a mystery to me why he named it Hope Concert. Anyone know?) this year, but I hope to watch it and see him again next year.

And it brings back memory to LSG Fan Meeting event in Jakarta last month.

So glad that finally LSG and his management realized that he has many Airens (name of LSG fans) in Indonesia and Malaysia. After a successful Fan Meeting in Singapore last August, LSG came back to SEA in November: 1-3 Nov in Kuala Lumpur (Malaysia) and 3-5 Nov in Jakarta (Indonesia). Awesome!

The day before Fan Meeting, LSG had press conference in Taman Anggrek Mall. Only invited people could come but it’s an open venue so anyone in the mall could see him from upstairs.

The Fan Meeting itself was held in a built tent in Taman Anggrek Mall (TAM) parking lot. Even though it’s a temporary tent, but it was big and comfortable. The entrance queue was not long, and the verification check was fast. Good job, Munial Sport Group! What I like most is the big moving sign on TAM saying “WELCOME TO JAKARTA, LEE SEUNG GI” and “JKT ❤ LEE SEUNG GI”. The sign was so big that you could see it from across the road. 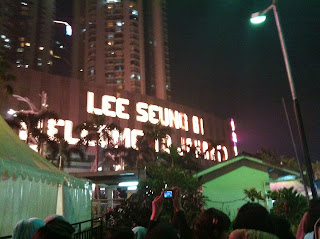 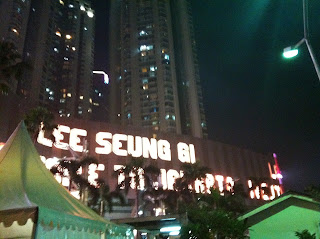 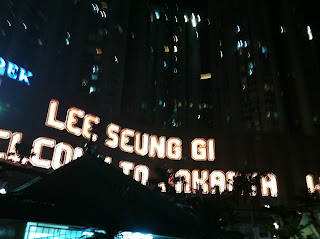 The opening song was ‘Losing My Mind’, which is one of soundtracks of My Girlfriend is a Gumiho, which is one of LSG dramas AND my favorite. He was soooo charming, and dancing to the song a little bit shy, so cute!

After the song finished, the MC of the night (Dave Hendrik) and 2 translators came out and joined LSG on the stage. The quizzes, games and talk shows involving audience were started. Some participants to were chosen by lucky draw, by flowers put under lucky audience seats, by tennis balls thrown by LSG. Well, I’ve never been lucky for this kind of thing.

First game was answering questions about LSG, such as “What is his character name in Shining Inheritance drama?”, and “Where 1N2D did go when Lee Seung Gi joined the show?” As a die hard fan of 1N2D, I knew the answer to the second question precisely: Pyeongchang in Gangwon-do province. I watched that 1st episode of 1N2D with LSG after I went to Pyeongchang last winter (to watch kpop concert). So I could relate and remember “oh I’ve been to this place before”. Also, Pyeongchang is rapidly promoted by Korean Tourism Organization as the host for Winter Olympic 2018. So, I kinda remember that. The third question was to draw a woman face that LSG would like. He said the eyes should not too big nor too small. Hmmmmm… I’m definitely not his girl type since my eyes are big haha.

Second game was dancing to his song ‘Losing My Mind’, and the third game was finishing his song.

After that, there was a kind of talk show session. He talked about his drama, music, gossip, and so on. Apparently his most successful drama  was Shining Inheritance, followed by King 2 Hearts and Gumiho. While for me personally I like Gumiho the most, and I don’t like King 2 Hearts. Finished with the talk show session, LSG performed few songs before saying goodbye.

What’s funny for me is he didn’t sing Tonight song at all. The name of this event is Tonight with Lee Seung Gi, isn’t it wrong if I expected him to perform that song? Anyway, I really really enjoyed that night 🙂