Who says Jakarta does not have decent beaches? It has, but it would take one boat away… to Pulau Seribu (thousands islands). After 4 years ago visited Harapan Island, this time I had a chance to visit another island in Pulau Seribu called Pelangi Island (pelangi means rainbow). Not like Harapan Island which is a populated island, Pelangi Island is a resort. Most islands that can be visited in Pulau Seribu are resort islands, except Harapan, Kelapa, Pari, Pramuka and Tidung Islands. I went to Pelangi Island with my office colleague, just a small group of 15 people.

We booked 2 days 1 night package with Raja-Wisata.com. They are very friendly, helpful and most important thing is very fast response. Our Whatsapp messages are always answered quickly. The price for Pelangi Island varies depends on the type of room we want to book. There are 4 types: Edelweiss, Bougenville, Jasmine dan Tulip. Edelweiss and Bougenville are bungalow like a cottage, each has their own building and separated from other bungalows. While Jasmine and Tulip are like usual hotel room, attached to each other. As you can see from the room map above, all rooms are located on the sea side, except Tulip type. We booked 7 Bougenville rooms: 2 persons per room except 3 ladies in one room. 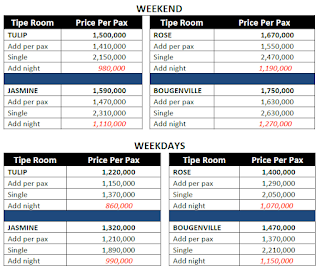 We gathered in Marina port in Ancol at 7am, because the boat will depart at 8am. Apparently we got one boat privately for our group, yay! Our boat departed from Dermaga (Pier) 17 where a friendly staff from Pelangi Island named Oscar was already waiting for us, not from Raja-Wisata.com. This was a nice comfortable speed boat with seats, not like a wooden boat from Muara Angke port (now moved to Kali Adem port) when I went to Harapan Island 4 years ago. With this speed boat, it took only 1.5 hours to Pelangi Island which is a little bit further north than Harapan Island, instead of 4 hours.
Upon arrival in Pelangi Island, we were greeted by waitresses who gave us nice welcome drinks. We were right away excited seeing the clear blue sea water surrounding this island. We checked in to our room and adapted to this peaceful island while waiting for lunch 12pm. We got room Bougenville 7-13. Our rooms were not too close to the front desk where most activities located, but that’s okay. The path walks between room and front reception were quite stunning besides the sea and shaded by big trees. The full wooden bungalow is so big, it could even accommodate 5-6 people. There is TV and AC, but no TV remote. We had asked the staff but they seemed forget to deliver it, and we also did not too bother asking again because who needs TV when you have that beautiful sea view in front of your room? Electricity in this island was using genset which was few times off. They provided towels, body soap and shampoo inside the bathroom. After resting my bags, I went to explore the beach just in front of my bungalow. Soon almost my whole group was gathering in this beach, playing with sea water, taking pictures, chatting and snack-ing.
At 12pm we went to the restaurant deck above the water in front of this island. They provided nice buffet lunch. At that time, there were another bigger corporate group staying in Pelangi Island too. After lunch we went to receptionist to plan our activities for the afternoon. We were interested to do snorkeling. They guy said we could rent snorkeling gear and swimming around this island, because fishes and corals could already be seen not far from island. But we could also rent one boat to take us to the middle of the sea and swimming there. We opted to take the boat, but later on 3pm. While waiting for 3pm, some were just sitting on the beach bench, some were playing volleyball and tennis table provided free by the resort, and some were going back to their bungalow to sleep. Our agenda was really flexible and easy hehe. During this trip, I wanted not just holiday but also socializing. That’s why I did not bring earphone and books which were associated with isolating. But apparently we need sometimes off for ourselves too. I should have brought a book and enjoyed reading it by the beach. 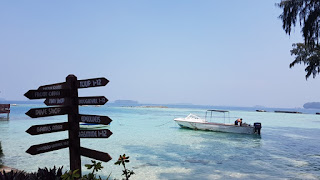 Around 3pm we all gathered in front of diving shop to choose our snorkeling gear. Renting snorkeling gear varied between Rp.40,000 to Rp.70,000 depends on which items you want to use (masker, snorkel, fin, life vest). Renting one boat cost Rp.500,000/hour with capacity 15 persons. First we were brought to somewhere near Perak Island. In this spot, the sea was not deep only 1,5 meters, some of us could stand and walk among so many little fishes. When we threw out some foods, they all gathered to snatch the foods. Unfortunately the current around this area was moving fast so we could be taken unconsciously far from where the boat anchored, especially the ones who could not swim. Two boat guys from the resort were helping shepherding us haha. One by one was going back to the boat and we’re off to next stop. The boat guy took us to Perak Island where many tourists flocked. From afar we could see many other wooden boats were anchored on the island pier, and there were too much crowds on the beaches surrounding this island. None of us were interested to stop there. Staying in private resort beach like Pelangi island where we could have the beaches for ourselves, of course we said no no, and asked for another better snorkeling spot in the middle of nowhere. The boat guy then took us to another spot near Bintang Island, and oh boy the sea creatures there were amazing! Not too deep but not too low as well, about 2 meters we could see colorful corals and fishes. Even we could persuade some people who were afraid to go into the water to check this view. Later I just realized it might be the same spot with one of snorkeling spots I went 4 years ago (near Bintang Island). We were swimming quite long time there until we’re tired and finally going back to Pelangi Island. The ride back was another thrilling experience because of fast current. We arrived back in Pelangi Island around 5.30pm, just in time for enjoying coffee break in their restaurant (fried banana and coffee/tea) while seeing the sunset. Ah, life was good. 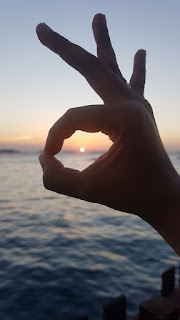 After the golden sunset disappeared, we headed back to our rooms to take shower and change clothes for dinner. Our agenda for 2 days surely involved a lot of eatings. While another company group were holding their performance events on the big field near receptionist, we bought 3 sets of playing cards from the resort Mini Shop and played them until 9pm, while waiting for our seafoods BBQ. Whattt, another meals? To have BBQ we need to pay additional charge Rp.120,000/person. Unfortunately the BBQ session was not like we imagined. The fish and squid were grilled by the resort staff somewhere then brought to us who were waiting in tables around Mini Shop. We could order drinks (alcohol or non-alcohol) from the shop. It was just like another dinner. In fact, the grilled fish was just the same like one of our dinner menu that night. It would be more fun if we could grill them by ourselves (with their supervision, of course). We were also not allowed to bring our own grill tools and foods like sausages, corns etc. They really should change that BBQ rule, maybe it’s ok the foods are coming from them only but at least allow us to grill the foods by ourselves. We were having our second dinner that night while enjoying the other company group performance haha free entertainment!
Around 10pm we walked back to our room, guided by a beautiful white dog. Ah have I told you, there was a kind dog in island who always guided us towards our room since we came there in the morning. He/She made sure each of us went inside our room safely. He/she stayed near my cottage whole night. We knew it because we heard him sometimes barking to other animals who passed by my bungalow (maybe some kind of lizards or squirrels but surely not supernatural things because the dog was barking not howling). My friends called him/her my dog because he/she always tailed me behind, which I wondered why because I was not really into dog (and any animals in general).
The next morning I and some friends swimming and sitting on the beach in front of my cottage. There were many black sea urchins with their dangerous sharp hair around this beach so we need to be careful but we could still enjoy swimming in it. Not far from beach line we could already found corals and small fishes. The fishes seemed not afraid of human, they were happily swimming along with us. After swimming and taking shower, at 8pm we went to restaurant for breakfast by the sea.
After that we gathered in front desk to try all available activities. We rented 4 bicycles and 2 ATVs (All Terrain Vehicle) for about 1 hour and took turn using them to go around the island. The island was not that big, only 12 hectares so we could cover the whole island in less than 30 minutes with bicycle. There is a fine sea side path to walk or bike circling the island. After this activity, I discovered there were about 5 beaches around this island. One beach is on the left side of front pier. One beach is near Mini Shop and room Bougenville 1 and 2. One beach is in front of Bougenville 11 (my bungalow). Two other beaches are located in the right back of island. The beaches were nice but the surroundings were too isolated, not maintained and quite scary (maybe not if you go there in big group). On the right of island there were many unused cottages already covered by plants.
Back in front desk, some guys already prepared for taking banana boat. While some other people, including me, prepared for another swimming, yay! I couldn’t get tired of swimming in this pretty island. This time we were swimming on the beach near Mini Shop. Same like the beach in front of my cottage, we could find many corals and small fishes not far from beach line. They were even more beautiful than our first snorkeling spot yesterday near Perak Island. After that, I tried to swim in the other beach on the left side of front pier. No sea creatures there maybe because the current was quite fast. At 11.30pm we all headed back to our room getting ready for check-out.
We brought all our stuffs to receptionist then had lunch in the restaurant. Around 2pm we boarded our boat to go back to Marina port in Ancol. The holiday so far went well for me until our boat bumpy riding back to Ancol. The sea current was too strong so I got seasick even though already consumed anti nausea drug before taking the boat. Nevertheless, the trip was very enjoyable. That was the first time I did snorkeling again after 2 years. I did traveling between these 2 years but mostly avoiding sea places, because it would be difficult to do snorkeling with small kid. Except with the strong current on the way back, I think traveling to islands like this Pelangi Island was quite child friendly. We could just do snorkeling/swimming not far from the beach, no need to take boat to middle of the sea. Maybe next time I will bring my child to visit another islands in Pulau Seribu.
Tags:Greater JakartaIndonesiaThousands Islands