During my business trip to Bali last October, i was staying in Ibis Styles Hotel in Denpasar for 2 nights. Honestly Ibis Styles, with its too bright decoration, is not a kind of hotel I’d like to stay. But my business partner, who was already in Bali 2 days ahead of me, was staying there, and I thought it would be much convenient for me to go to our customer together from the same hotel. However, it turned out my experience staying there was not bad at all. My office booked it for me using our regular travel agent. It cost around IDR950,000 for 2 nights.

I arrived before check-in time, but the hotel staff could manage for me to get in the room directly. I like the fully carpeted room. Even though the room was small but looked very comfortable and cozy. It reminds me a little of Swiss-Belinn hotel in Malang except this one was too much colorful in green and purple. They said it makes the customers in happy mood, but seriously it does not! Then I found the shower room light was not working. The tehnician was coming right away after I called the receptionist. Apparently there was no problem with the lights, it’s just that I needed to turn on another switch plus that shower room switch (some kind of switch combination?). They provided liquid soap and shampoo 2 in 1 like the ones for baby (and this made my hair very hard). They did not provide slippers and dental kit. When I came down to lobby to go out, I approached the receptionist to ask about slippers and dental kit. He said those were being provided free upon request only, and they would bring them to my room. When I came back later at night, those items were already in my shower room. 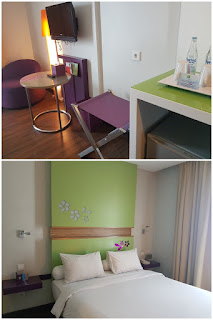 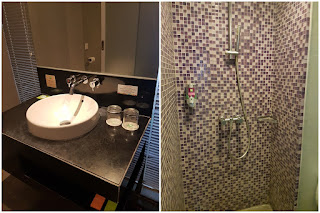 I also asked about the spa facility they have which I planned to take after coming back to hotel later that night. They said the spa would be closed around 9pm, and did not need reservation. But later on that night I was so disappointed that the spa was full when I called them around 7.30pm. Should have made a reservation! Around 10pm I got a phone call in my room from them asking if I still wanted to take the spa because they’re available now. Hmmm apparently their closing time was quite flexible, but I was already half asleep and not in the mood already. On the next evening I called them again at 7pm and they were full again and I said to inform me as soon as possible when they’re available. I really needed the Balinese massage because it’s my last night in Bali and I just sprained my ankle badly in the afternoon. Finally they called me around 9pm, and I directly said yes. Better than 10pm previous night.

They offered spa in their place or in my own room. Even though it’s quite tempting to just staying in the room, but I would prefer to have massage in a proper spa room with relaxing music. The place called Asterids Spa was located outside the main hotel building; on the second floor while the first floor was occupied by gym. They offered me a welcome drink: hot ginger. I did not like ginger but at that time it tasted nice. The treatment rooms were not so many, perhaps 4 or 5 rooms only, and each was very simple inside contains one single bed and one bedside table. At that time there was only one staff left in the place, who was handling me. Maybe the other staff were handling customers inside hotel rooms. Since she was alone, she often asked me permission to get phone calls and greeted guests on the receptionist desk. They had so many treatments that we could choose, from head to toe, and I chose massage + body scrub (IDR230,000 paying cash on the spot, cannot be charged into hotel bill). The massage was wonderful, but body scrub was a bad choice because it required taking shower afterwards and it was 11pm already *sneezing*. Going to shower room, with only towel on my body, was by passing receptionist desk, fortunately there was no any guests (especially male) at that time. They should design the shower room location properly. Anyway I felt so relax afterwards. 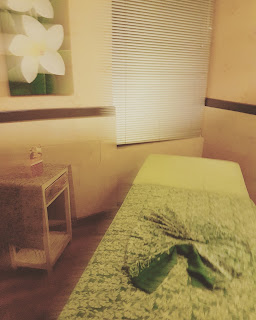 There were few Ibis Styles hotels in Bali, but this one was located in Jl. Teuku Umar, Denpasar city, which was near my customer office (around 4km). I did not know any good places to visit around there, that’s why on my free day I went to Sanur and Nusa Dua instead. On the second day I arrived in the hotel around 7pm, and felt so lazy to walk around this hotel to find foods for dinner. I called receptionist to ask whether I was allowed to order foods from outside delivered by Go-Food into the hotel, she said yes it’s allowed as long as I picked it up in the lobby. I then searched nice foods around there in Go-Food and finally ordered one complete package from Ikan Bakar & Goreng Khas Jimbaran, a restaurant near the hotel (around 700m). The package contains one pack of rice, one grilled fish, two grilled prawns, two grilled oysters, two grilled squids, few veggies and 5 packs of 3 types of extremely spicy chili sauce! It only cost me IDR88,000 (plus strawberry juice) but the portion was so big and it probably the best meal I had in Bali. Jimbaran is a name of an area in Bali which is famous with its grilled fish. I could not go to the faraway Jimbaran but I still could taste the grilled fish, thank you Go-Food! 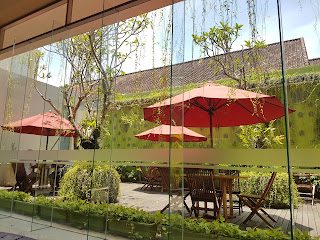 Nice view from lobby and restaurant

The breakfast food in the hotel itself was just okay and nothing special. No swimming pool to make a nice breakfast view. That was the other dislike I have for this hotel (except the bright green orange purple colors). Mostly traveling with kid, I was usually busy taking care of her in hotel swimming pools rather than enjoying the swimming myself. Now that I was traveling alone, I could not swim either. Other than those, it was a pleasant stay in Ibis Styles Hotel Denpasar.

Read also my journey in Bali.