Another day in Sabang. Woke up to the sound of sea, how peaceful it was! This was the view from my room (more into the accommodation in the other post). Sunrise was not observable at that time because it was a little bit cloudy, and also raining heavily the night before. 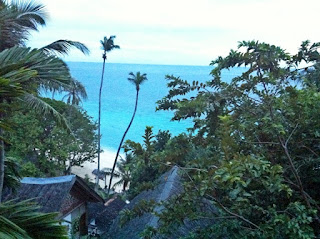 After my little baby woke up, we went down into the beach joining some of our groups who were already there sitting and swimming. I was too jumping into the sea. The water was so clear but there were many small rocks on the sands that we should be careful of. My Brother got his toes wounded and bled.

My Father went out to the town with our rented driver to buy us Nasi Gurih (steamed rice cooked in coconut milk, Aceh specialty) for breakfast. After eating and showering, at 10am we were all ready to go to continue exploring Sabang. While we covered east Sabang on the first day, today we would cover the west part.

Our first destination was a lake called Danau Aneuk Laot. Aneuk Laot in Acehnese language means Sea Child. This lake was the water source for Sabang citizens. It’s not really a tourist attraction, because nothing to do here except capturing the beautiful picture. 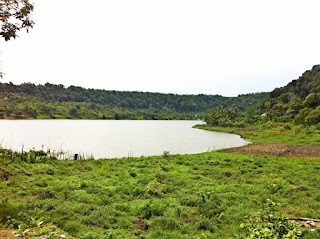 Next we went to Pria Laot Waterfall. Except Aneuk Laot, Sabang also has Pria Laot which means Sea Man (but they forget about Sea Woman). From the parking lot, we needed to walk for about 500m towards the waterfall. It turned out the walks became fun and adventurous, because the path was broken in the middle of the way, and we needed to cross the streams, go up and down the rocks. Very challenging! Not really suitable for old people but my father and father in law could make it! They seemed very excited and enjoying the trip, and perhaps to prove to themselves that they’re not too old for this. God job, Dads! 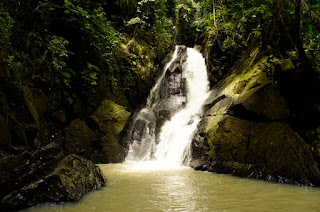 From Pria Laot, we continued our trip to the must visited place in this island (but I did not visit it on my previous Sabang trip) which was Kilometer 0. As the most western part of Indonesia, the Kilometer 0 is lied here (well perhaps Merauke also claimed their Kilometer 0 :P). There should be a monument but at that time it was under renovation. 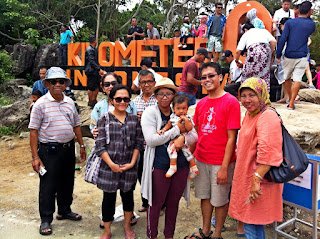 Yay our baby has been to Kilometer 0 of Indonesia

Now, the highlight of today’s trip is snorkeling in Rubiah Island. To go to Rubiah Island, we had to order a boat from Iboih Beach. This beach is quite crowded with food stalls, diving centers, accommodation places, shops and visitors, with trashes everywhere. It’s a famous place among backpackers because we can find cheap accommodation here. After having quick lunch on Iboih beach, we rented 2 boats to bring us (15 people) around Rubiah Island. Renting one glass-bottom-boat cost around Rp350,000 which can accommodate around 8 people (they said 8 people, but in reality we saw many boats filled with almost 20 people). Except the boats, we also rented snorkeling gears that cost about Rp40,000/person. 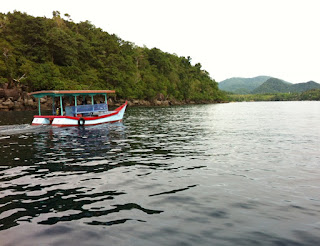 Rubiah Island is famous with beautiful underwater garden. So renting glass bottom boat where we could see the sea living on the boat is a recommended thing to do. The island itself is not really far from Iboih beach, in fact we can see Rubiah Island from Iboih Beach and vice versa. But the boat brought us circling the island first and stopped in 2 spots to see the magnificent sea corals and fishes. The boat then dropped us in Rubiah Island for us to swimming, snorkeling and eating in one of grilled fish restaurants there, while the boat was back to Iboih Beach to serve other visitors. When we’re ready to go back, we just needed to call the boat driver to pick us. 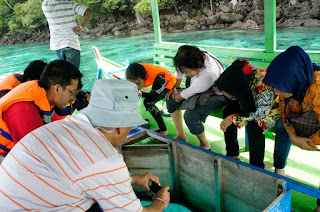 The group was looking into the bottom glass

When we arrived in Rubiah Island, it was already packed with many visitors. Perhaps they had been there since the morning. It’s quite difficult to find seats, but some of us did not care because we went there for swimming, while the older people sitting around. We did not need to swim further into the middle of the sea, just few meters from Rubiah beach, we could find the beautiful corals and fishes already. We really enjoyed looking at them not realizing that we swam further away from the beach (thanks to the sea wave too). 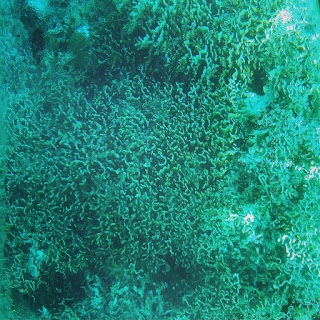 After about 2 hours we finished swimming and called our drivers to pick us to go back to Iboih beach. There was no proper place to clean up, shower and change the clothes, both in Rubiah Island nor in Iboih beach. O maybe there was, but I did not know, and I just wanted to go back soon worrying my daughter would be tired (in fact, no, she’s so strong :D). On the way back to our hotel in all wet, we passed by Sabang city and decided to buy foods for dinner to eat in the hotel because we’re too tired to go back outside that night. We managed to order one of local specialty food: Octopus Skewer/Satay. It was a little bit rubbery, but the sauce is using the same peanuts sauce like usual Chicken Satay, plus additional soup. Yummy!

That is the end of our trip in Sabang. The next morning we needed to get up early to catch the ferry at 7am. See you again, Sabang! Hope my next trip there would not be longer than 7 years.