To the Ancient City: Ayutthaya

Ayutthaya, the ancient capital of Thailand from 1351 to 1767, is located in the central of Thailand, about 85 km north of Bangkok. The kingdom is destroyed by Burmese armies, but we still can see the ruins. Since I love history, I put this as one of my itineraries in Bangkok.

We started the day very early, because the tour picked us up at the hotel around 5.30 am. We were the first passengers in that minivan. It then stopped at some hotels to pick up other people before heading to the meeting point in Khao San Road, the center of backpackers in Bangkok. I wonder if all the drivers in Bangkok drove recklessly like that, so scary!

When we arrived there, many people and minivans were already gathered. Each of us was given colorful stickers to stick on our clothes. I, my husband and some people got blue-yellow stickers, and many other got blue-only sticker. We then got inside another minivan with other group of people, and this time with 2 girls as our tour guides and a-not-so-recklessly driver of the day.

Phra Nakhon Si Ayutthaya is about 1,5 hours from Bangkok, depends on the traffic. It is located in the middle of 3 rivers: Chao Phraya, Lopburi River and Pa Sak River, makes it looks like an island. See the map of Ayutthaya below for more details. 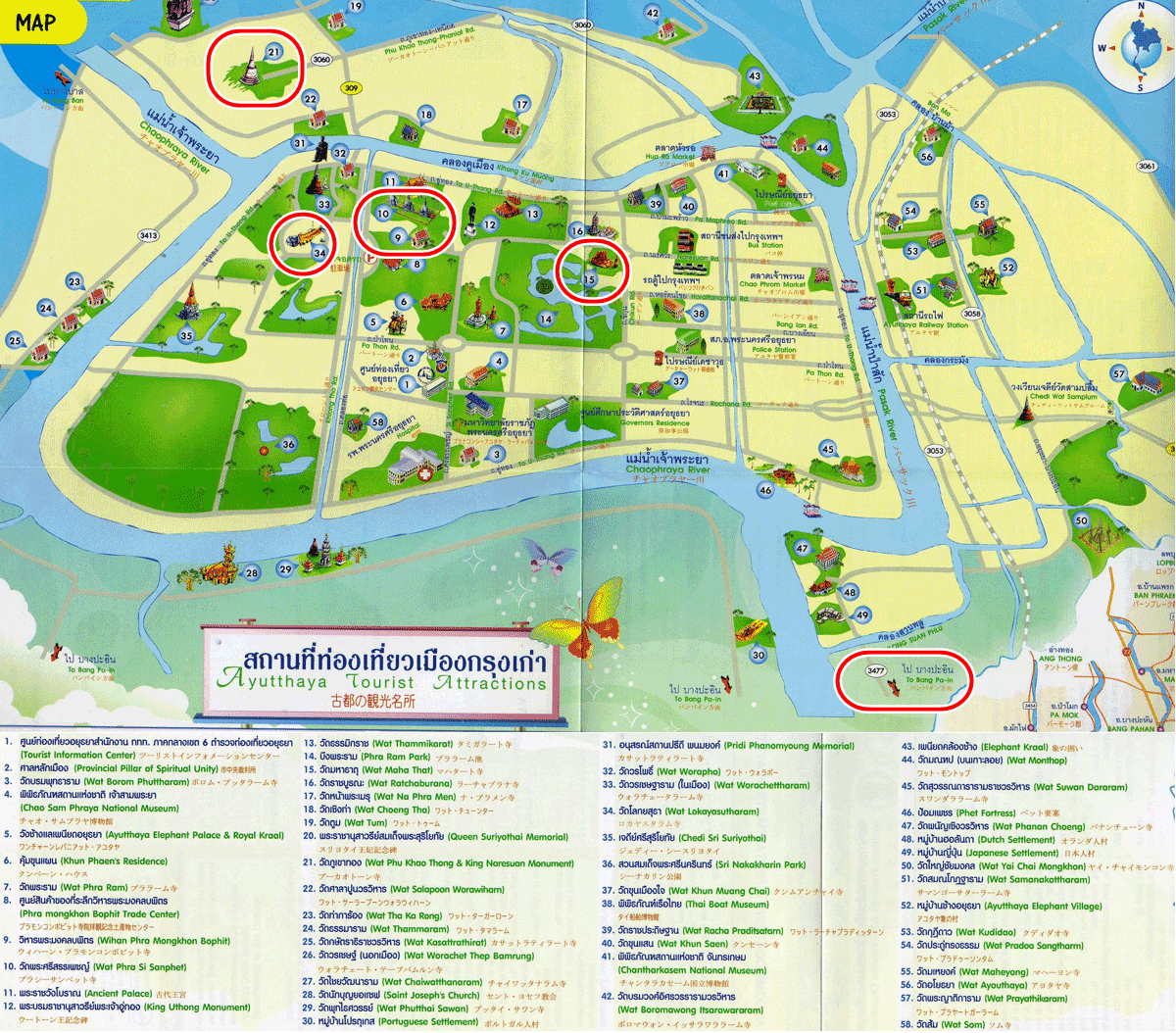 For this tour, all of us would visit 5 temples. Participants with additional yellow sticker (like me) would change to another tour minivan to visit one additional place called Bang Pa-In Palace before heading back to Bangkok, while the blue-only sticker would go back to Bangkok directly after 5 temples. The package already included the entrance fee for all the places we would visited, foods for lunch, pick-up and drop at the hotel.

Our first stop was Wat Phu Khao Thong in the outer side of Ayutthaya city. This Chedi (Buddhist temple) was built first by a Burmese king to commemorate his victory over Ayutthaya in 1569. However, he didn’t finish the construction and returned to his country. Few years later, Ayutthaya succeeded to win over Burmese, and a Thai Prince continued the construction of this Chedi in Thai style. So, this monastery has base and body in Mon (Burmese) style, and top in Thai style. Next to the temple, there is ordination hall where you can find many Buddha statues, and a small vihara next to it. 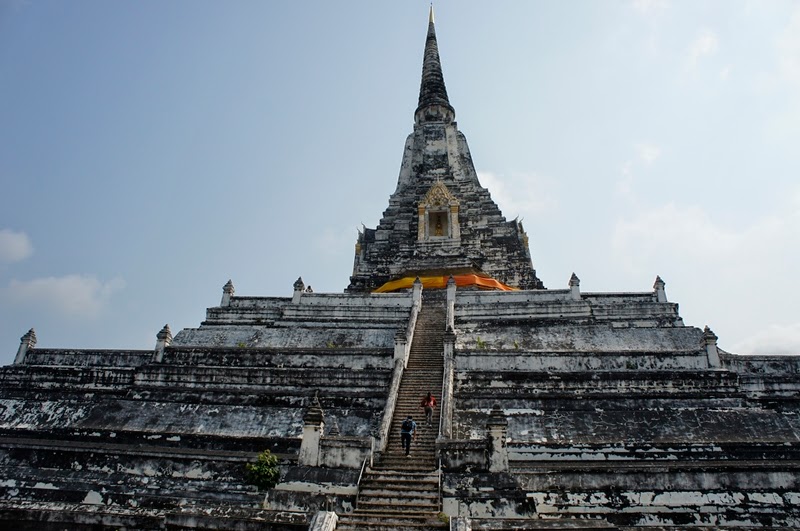 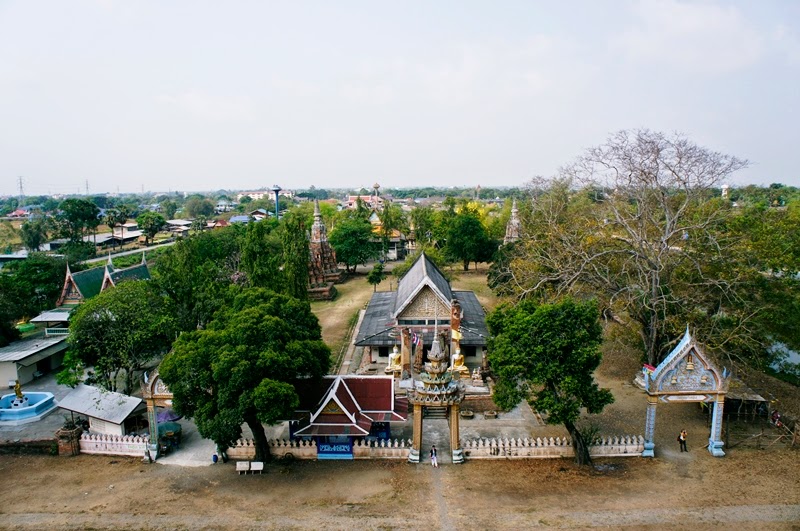 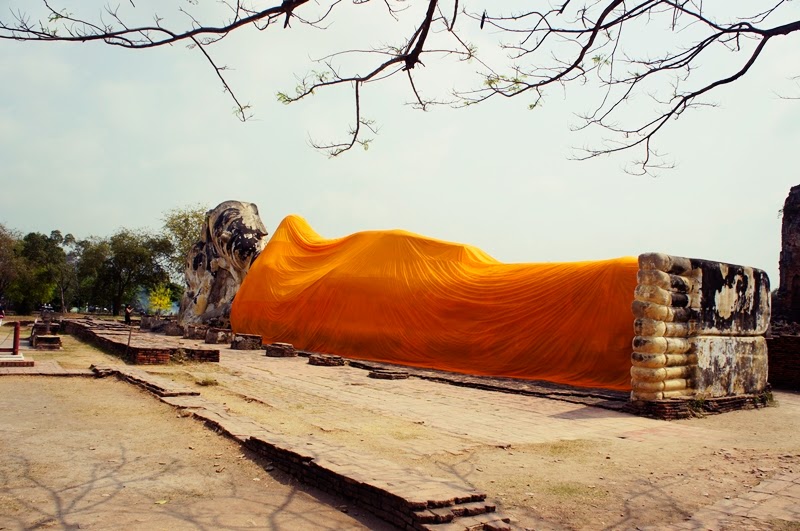 Next stop before lunch was Wat Maha That, located almost right in the center of Ayutthaya city. The highlight of this temple is the Buddha head image embedded into a tree trunk. To take a photo with this image, one cannot stand higher than the image. When Ayutthaya Kingdom was destroyed, many Buddha head images was cut and stolen to be sold with high price. One time, there was a thief who’s stealing a Buddha head image and almost caught by a guard. He then dropped the head image on the ground and ran away. Nobody took the head image, and there’s a tree started growing on that location, making it trapped between the tree trunks. 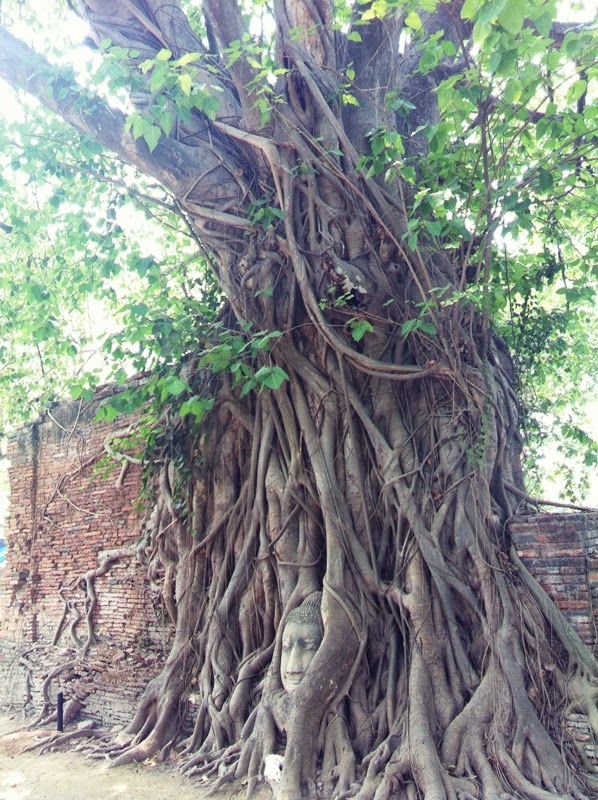 After this temple, we headed for lunch in a restaurant near a river. It was already included in the package, but we had to pay for the drinks. Each tour group, excluding the guide tours and the driver, was sitting in one big table and sharing the foods: rice, vegetables, chicken and omelet, which were not spicy at all. There we talked to each other and found out about the different fares all of us paid for this tour. The blue-only stickers paid between 500 Baht to 700 Baht for this tour, much cheaper than us the blue-yellow stickers who paid 1250 to 1300 Baht per person. The blue-yellow stickers had only 1 additional place to visit compare with the blue ones, I wonder what’s so special about this place that made the price too much higher than the blue-only ones. Moreover, I was really disappointed that the travel agent didn’t offer me the blue-only tour, so I could compare and decide which one to take. 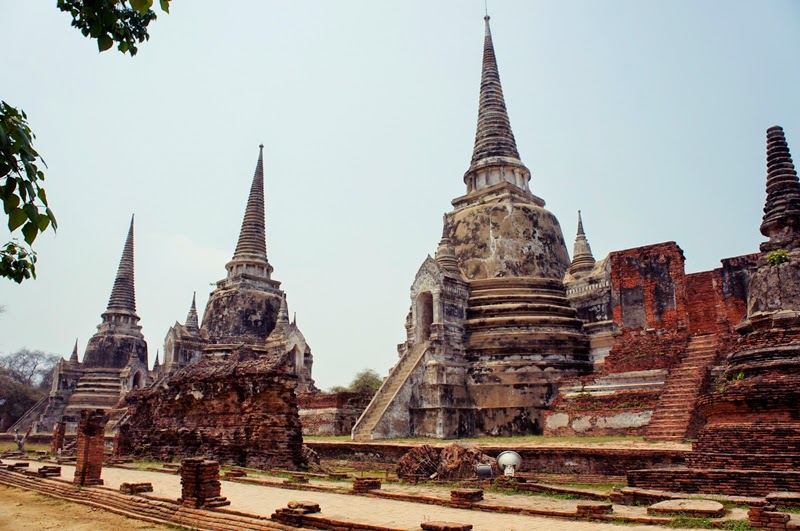 Three Chedis in What Phra Si Sanphet for the 8th King (right), the 9th King (middle) and the 10th King (left) of Ayutthaya

The next building to this temple is Wihan Phra Mongkhon Bophit. Not like other sites we visited, this temple has modern Thailand style, but inside there is a bronze Buddha image from the ancient Ayutthaya. Honestly we didn’t much explore this vihara due to tiredness, instead we just sat down in shady seats while talking with other tourists. Actually we didn’t walk that much, it was the HEAT of Thailand that made us really exhausted. Yeah I know we come from a hot country as well, but back home we mostly spend our times inside aircon-ed buildings. For Asians, always remember to bring your umbrella everywhere in Thailand! 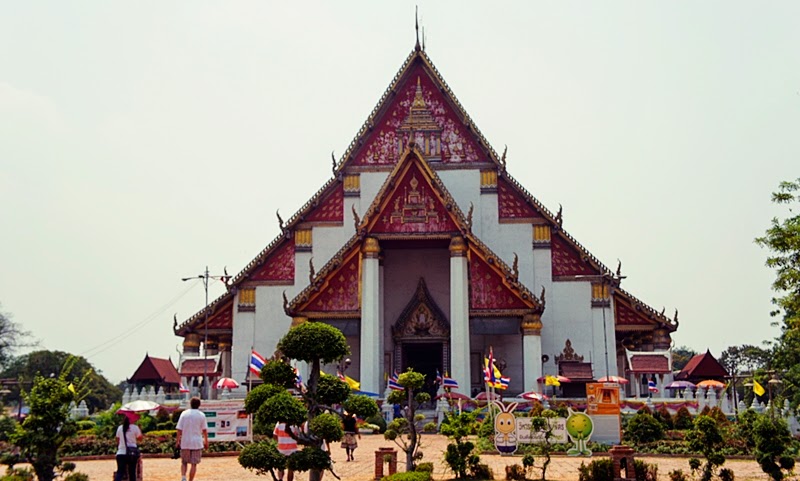 This site was the end of tour for the blue stickers. So, they went back to Bangkok with our minivan, while I, my husband and 1 other couple were transferred to another tour group in another minivan to visit Bang Pa-In Summer Palace. This palace is located outside Ayutthaya city, about half an hour by car, formerly used by Thai Kings since mid of 19th century. So, it was not as ancient as Ayutthaya. Just like Grand Palace in Bangkok, this palace complex contains of several buildings in foreign styles, such as Chinese and French, is used rarely for banquets and special occasions by the current King. Visitors also must wear appropriate clothes. 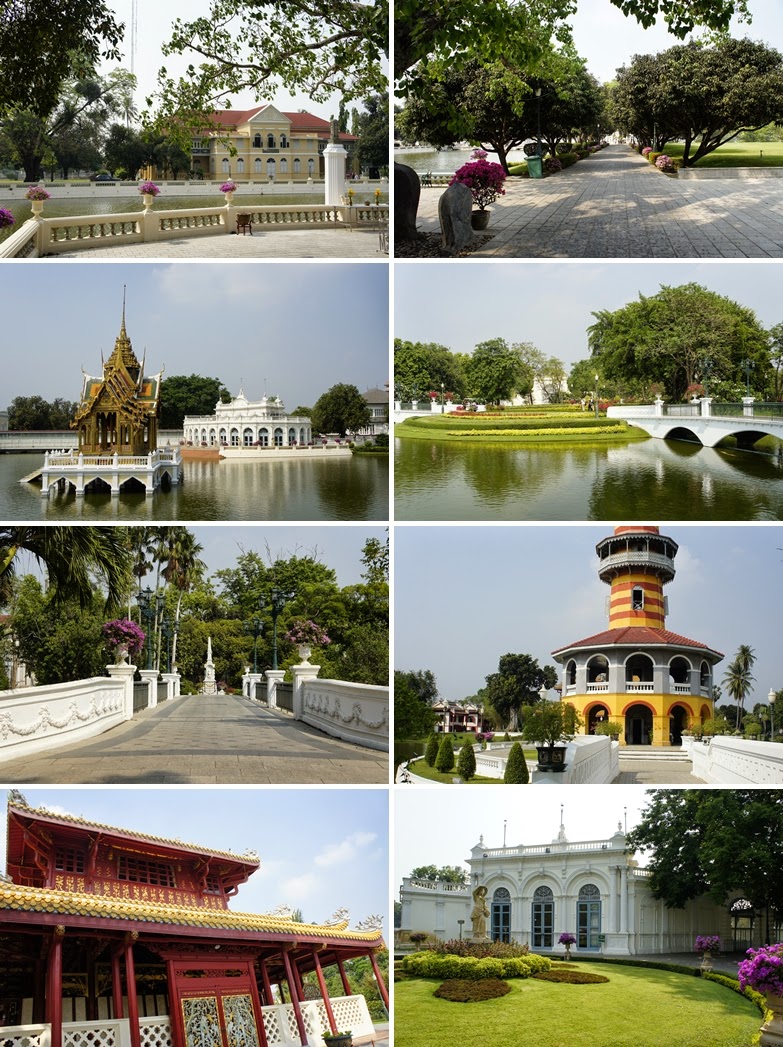 Bang Pa-In Summer Palace
So, is it worth it to visit this additional place on Ayutthaya Day Tour? NO, nothing special at all! Plus, the new tour guide after we transferred was not speaking English fluently. Nobody could understand what he was saying, so we purely depended on the palace brochure. The tour guides in the morning were much better, but STILL, the whole trip was not worth it for 1250 Baht per person. From so many interesting spots in Ayutthaya city (see the map above), we only visited 6 of them. On every stop, we were given general explanation only in the beginning, for about 5 minutes. After that, we were let go to explore the places by ourselves. The tour guide didn’t go along with us and explain the interesting spots one by one. In some sites, like Wat Maha That and What Phra Si Sanphet, there are spots with “headphone” picture to show that there are stories for these spots and you can hear them by renting the audio guide from the ticket counter (usually around 100-150 Baht). With 1250 Baht, they should have included these guides, huh!
I compared the people from the first tour group I was in, who mostly bought the blue-only tour, and the second group to additional Bang Pa-In Palace. The first group contained of young white foreign backpackers who were staying in a hostel in Khao San Road area, while the second group contains of Indians, Koreans, South East Asians and rich white foreigners who were likely staying in nicer accommodation in nicer area. Maybe if I stayed in backpackers area, I would get that cheap price for the tour. Don’t get scam like me, find a travel agent that would give you Ayutthaya Tour from Bangkok for 500 Baht. Another option, if you really know what to visit in Ayutthaya and you know how to get there from Bangkok by yourself or you are staying near Ayutthaya, is to rent a Tuk Tuk for the whole day to visit any places you want, like I did in Angkor Wat in Cambodia. Anyway, in my opinion, if you have visited Angkor Wat, you wouldn’t be enthusiastic and amazed with Ayutthaya too much.