To the Beach: Pattaya

Today we checked out from our hotel in Bangkok and traveled to the southeast side of Bangkok, to another city called Pattaya, popular for beach resorts.

The bus to Pattaya is departed from Eastern Bus Terminal (Ekamai), located near exit of Ekamai BTS Station. When we were looking for the ticket counter to buy the bus ticket, we were approached by a man who showed us the counter for Pattaya. He seemed trustworthy, and the ticket price they asked us was 130 Baht ($4) per person, not too much different than what I read in internet (~124 Baht). So we bought the tickets. He then led us the way to a minivan, put our baggage inside and asked us to get inside and wait (somehow we understood his body language). I was a bit worried, because this was not what I expected, to travel with a minivan. I thought we would be going by a bus!

Not long after that, other people started filling up the minivan, including tourists from Philippines and Indonesia, and some locals. The car would depart at 9.10am, but the car was quickly full of passengers, so off we went to Pattaya before 9am, and would take about 2 hours to Pattaya (depends on the traffic). Since the car was fueled with gas, every 1 hour it stopped in gas station.

When we arrived in Pattaya City (we knew it by seeing the welcoming board of Pattaya City on the way), the driver suddenly stopped somewhere in Sukhumvit Road, and he said it’s the last stop and everyone should alight. This was AGAIN not what I expected! I expected we were stopped in Pattaya Bus Station, where we would take public transport to our hotel like we planned. I was so panic and about to cry. Even with my husband and 3G data in my iPhone, I still got lost!

Now when I read again some articles in the internet about going to Pattaya, I just came across this article:

Be wary of touts who solicit you at various bus stations in Bangkok. Most of them provide private minivan transport and won’t drop you off at the main Pattaya station on North Pattaya Road. You will likely find yourself miles outside Pattaya. They also don’t begin their journeys until the minivan is full. Unless you want to charter your own van, you should stick to the government buses or those offered by Roong Reuang Coach.

Oops, I think we just got that one. Bangkok is really a scam city! Anyway, after calling and asking several times with the hotel staff, and checking Google Maps in my iPhone, I started to understand a bit where we were. Luckily we were not miles outside Pattaya. In fact, we were really close to South Pattaya Road. Our hotel April Suites is located near Central Pattaya Road. The Air Condition Bus Station (where we should’ve stopped) is located near North Pattaya Road. The hotel staff said we could go to South Pattaya Road and take a public transport called Songthaew (I really didn’t know how to spell it before I googled it) which would take us to Pattaya 2nd Road (Pattaya Sai Song). After the intersection between Pattaya 2nd Road and Central Pattaya Road we could stop there and walk to the hotel. 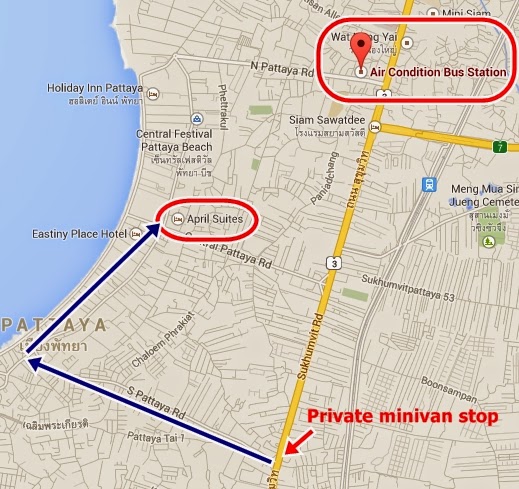 Our route to the hotel

We crossed Sukhumvit Road to go to South Pattaya Road, where some Songthaews are waiting for passengers. This dark blue public transport looks like this. 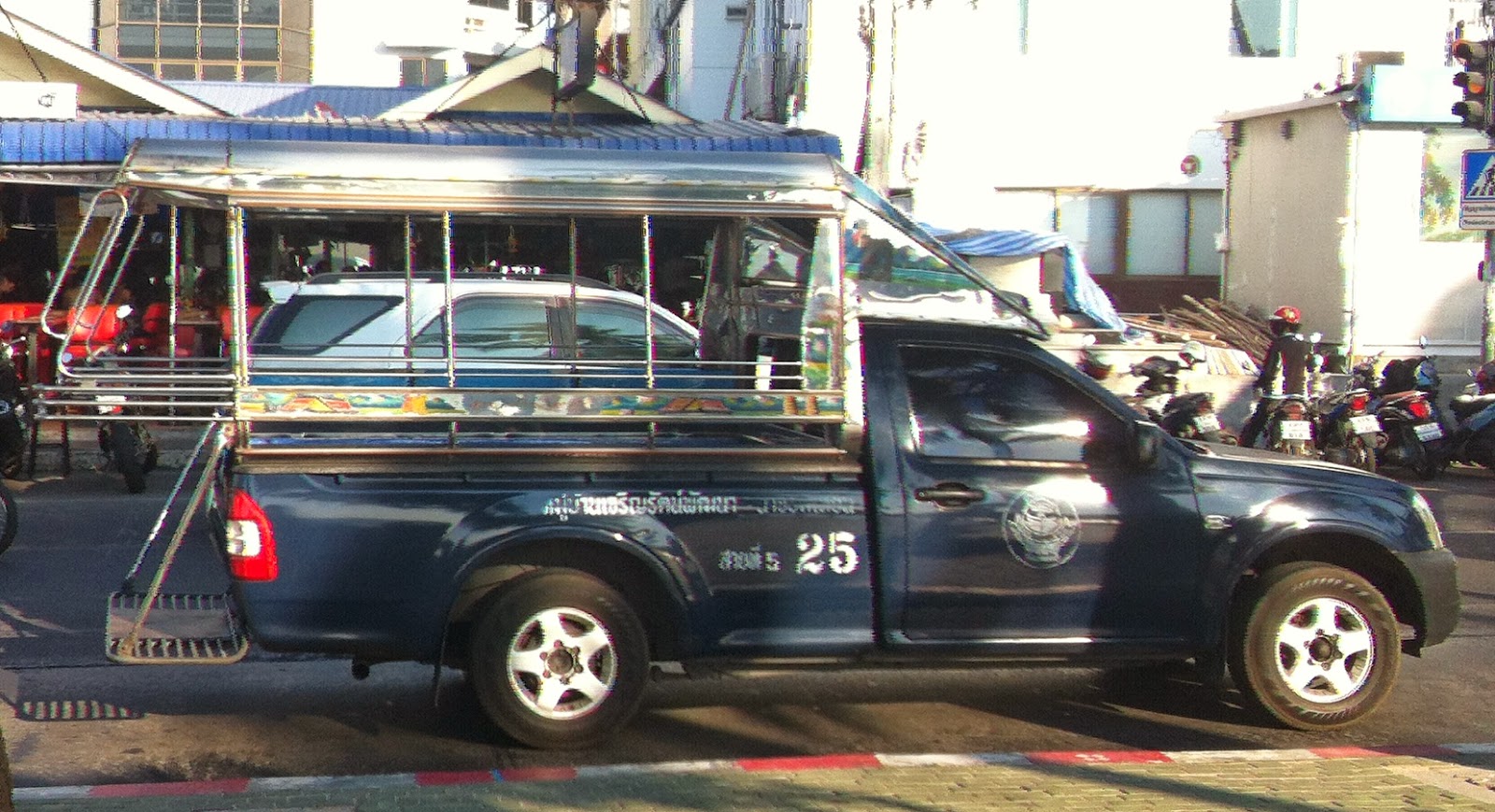 It starts to go when it’s already full by passengers. My husband showed our hotel address to a girl and an old lady sitting beside us. They were then talking in Thai discussing about it, and with body language we understood that the old lady would show us when to stop. Along the way, we examined how they used this public transport. There were seats enough for 14 people to sit, and some spaces for people to stand. It can stop anywhere you want, not in particular bus stops. If you want to stop, just press the bell on the roof. Everyone paid 10 Baht to the driver when they alight, not depends on the distance.

I remember not long after we passed CentralFestival Beach Mall, the old lady told us to stop. There we could see our hotel sign. After paying 20 Baht to the driver, we crossed the road, to our hotel located in a small street (Soi), not far from the main road. We finally made it! If we were stopped at Bus Station in North Pattaya Road, we would have taken Songthaew to our hotel for 25 Baht per person. While from South Pattaya Road, we took Songthaew to our hotel for 10 Baht each (cheaper!), plus some drama.

After check-in and put our baggage, it was already 1.30pm. We walked to CentralFestival Beach Mall to have lunch. The weather outside was so hot, so we walked around this mall until the sun was tamed. They said it was Asia’s largest beachfront shopping mall, facing Pattaya Beach. 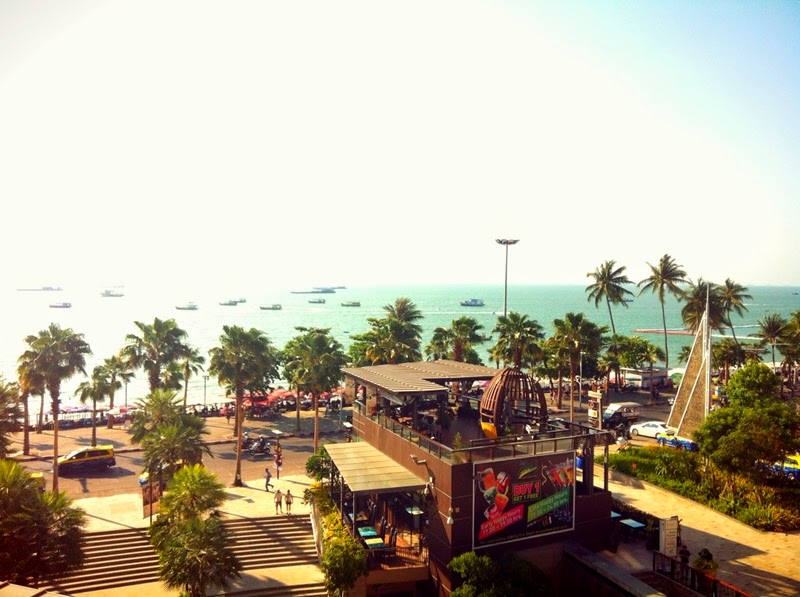 While having lunch, we booked online Bell Travel Service bus tickets to Suvarnabhumi Airport for the next morning. That is the best reliable transport service we can find to travel directly from Pattaya to Suvarnabhumi Airport (or vice versa). Our flight on the next day would be around 12.30pm, but the Bell Travel Service bus schedules to the airport are only at 06:00, 09:00, 11:00, 13:00, 15:00, 17:00, 19:00. Even though 6am was too early for us, but the next schedule 9am was too late for our flight, so we booked 6am bus. They would pick us up at the hotel at 5.30am. The bus fare from Pattaya to Suvarnabhumi Airport is 230 Baht ($7) per person.

It was so sad, we hadn’t traveled much in Pattaya yet, but already planned to go the next early morning. Pattaya is well-known for the beach/water sports, partying in clubs and lady boy shows. But we didn’t want to go for any of that. I was more interested to visit Mini Siam and Nong Nooch Garden, but half day tours usually start at 1.30pm, and we were already too late for that. So, let’s just relax and enjoy the rest of Pattaya. We walked around the mall and the beach, and slowly walked back to our hotel at 5pm. Our hotel has a nice rooftop pool, so we would like to swim there while watching sunset. 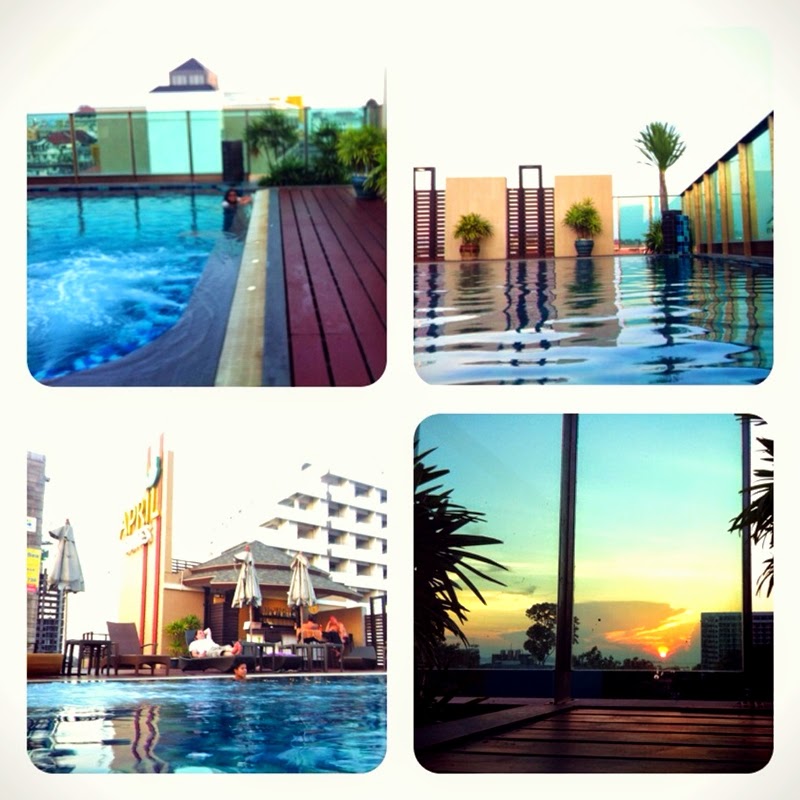 After swimming and taking shower, we then went outside to find some foods for dinner. We came from South Pattaya Road this afternoon, so this time we would like to see up to North Pattaya Road. We took Songthaew again along Pattaya 2nd Road, and randomly stopped at any crowded place. There were many bars along this road, and the local girls started to work. Everywhere I saw old white foreign guys (over age 50) with local girls. Pattaya is really their favorite place for retirement.

We finally decided to eat in one local food court on the street. In my Bangkok series I never posted a food picture right? Yes, because I am not a foodie. Since we already reached almost the end of my trip in Bangkok (plus Pattaya), let me post one Thai food picture: Seafood Pancake. It was so delicious! 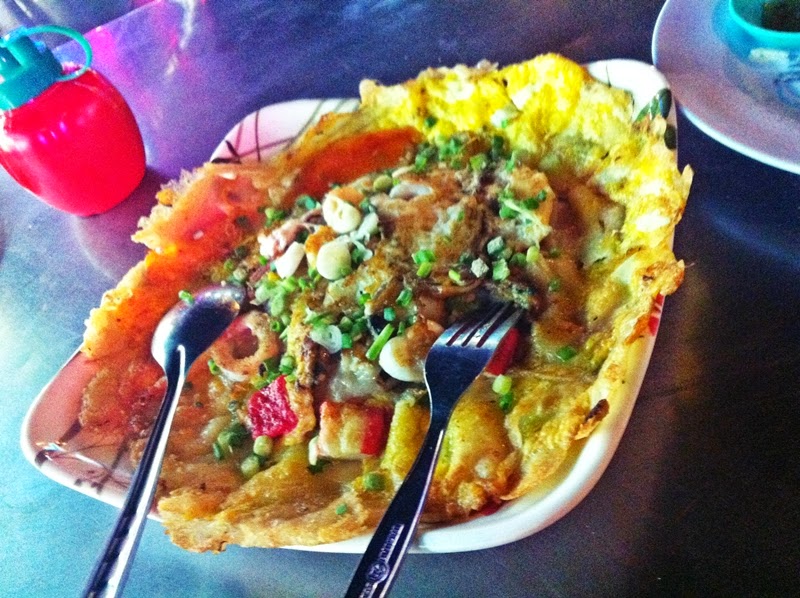 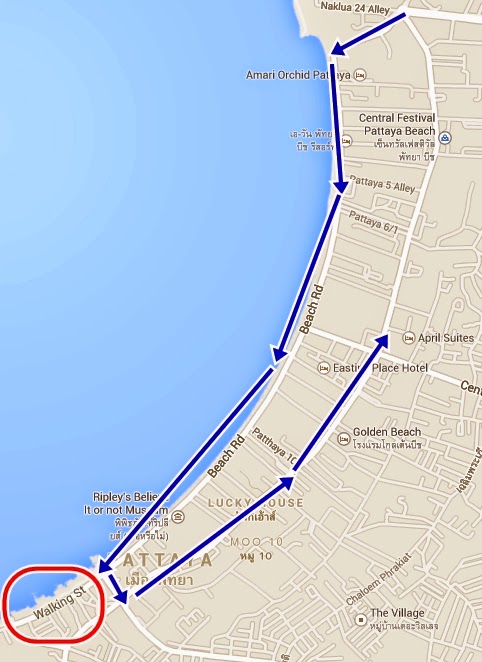 Our route back to hotel from dinner

Roads in Pattaya are easy to understand right? I feel so stupid why I was so panic before. Ok, that was our half day and night in Pattaya. I hadn’t spend much time in this city, but Pattaya with its crazy night life and many pathetic old foreigners, was definitely not my kind of favorites.