I do solemnly swear that the testimony I am about to give in the case now before the court will be the truth, the whole truth and nothing but the truth, so help me God.

Amazingly a friend of mine found out about this event. So there we went on Sunday. This is the first time the Supreme Court Singapore holds public event since moving to the new building in 2005. At first I was kinda excited that I would come in to this castle-like building (picture below). But apparently Supreme Court has moved to building behind it, the old one now is used for art museum and pre-wedding photo setting. 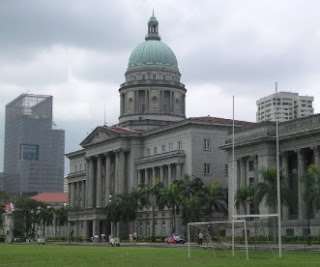 The new modern building has 9 levels. First we took short Explanatory Tour that guides us to a small criminal courtroom in Level 3. Then we went to Viewing Gallery in Level 8, with unique shape like UFO, where we can see Singapore River and phenomenon buildings around it. There are also some Legal Talks about some topics related to law in Level 9 in a bigger courtroom. For example the seminar that I attended is ‘Benefits of Mediating Commercing Disputes’.
. . . . . . . . . . . . . . *tick tick*
Read it 3 times.
Still out of mind? That’s what I felt at the beginning. Nevertheless, I joined it. It’s talking about in some cases we’d better to get a mediation procecution (win-win solution) rather than fighting in court to decide who wins and who loses (ha, I was listening!).

In this Living Courthouse event, there are also Legal Clinics where you can consult your problem or question in legal terms, Learning Corner, and taking special photo with a lawyer’s robe and wig (but I got no chance to try this, the queue is like forever). The highlight point is enactment of Humpty Dumpty case: “Who Pushed Humpty?”. Humpty (an egg) was falling in Level 2, being pushed by Big Bad Wolf as suspected person. The witnesses are Blind Mouse, a nerd guy something and Red Riding Hood Girl. It’s funny and very descriptive for children to learn about how people are doing in court. I enjoyed it also. The story ends up with Humpty comes as the last witness, tells public that he fell asleep at that time, so nobody pushed him.

How does it look like, the inside of Mahkamah Agung Indonesia?

previousSingapore Is Small, But Not The World
nextDig It Out