These are some remarks regarding public transportation in Jeju. 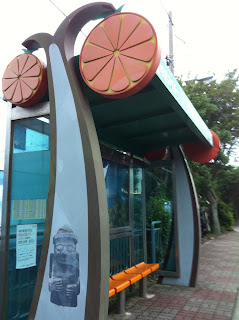 This is the public transportation I took to go to places I mentioned in this post.

I visited East of Jeju when I was staying in Jeju-si in HKJeju II. The hostel is just 10 minutes away from Jeju Bus Terminal, so if you travel with 2-3 people, it’s easier and cheaper to take taxi. I was traveling alone and I needed to safe my spending in transportation. People say, taking bus in Jeju is not easy and wasting time because the bus is not so frequent. But if you know the bus timing, you know when exactly you have to go to the bus stop, and you will not waste your time for waiting. 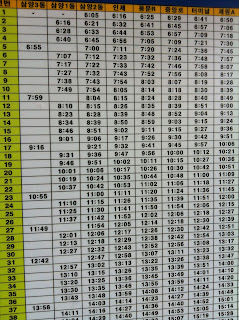 From Jeju City Bus Terminal, take a bus bound for the East Coast (Dongilju) in platform 4. This is the bus timing (click the picture to enlarge).

Try getting the bus as early as you can, because the journey to the east is gonna be loooong! The bus goes along the east coast road. Take a seat on the left side so you can see some sea views during the journey. 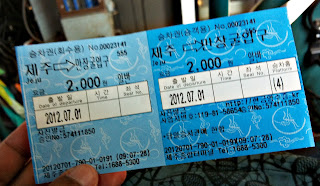 The bus stop is located on the main road. You need to walk further inside for 2 km (about 30 minutes) to Manjanggul. There is a bus to go inside, but it’s not frequent. The best alternative might be taking taxi. There are few taxis already waiting near the bus stop. I hopped directly to one of the taxis. I didn’t check it in the beginning, I just realized the driver didn’t turn on the taxi meter when I reached the destination. I paid 4000won for that short trip. If there was a meter, it should be only 2500won. But I guess that’s the way in Manjanggul. The driver will not use the meter but you should ask and bargain the fare in the beginning. The road to Manjanggul was surrounded by empty forest and fields, so it might not be convenient for those who are afraid of being alone 😀

Udo Island
From the same bus stop in Manjanggul, take the same bus (bound to Dongilju) to Seongsan Port, about 45 minutes (1500won). From Seongsan Port bus stop, you have to walk further for about 10minutes towards the port. There you can buy entrance ticket to Udo Island. There are few times of ferry schedule each day. Make sure you can come back to the main island by the latest ferry at 4.30pm.

Seongsan Ilchulbong
Walk back to Seongsan Port bus stop. Take the same bus (Dongilju) or take taxi to Seongsan Ilchulbong. It is very close, maybe only 3-4 stops away by bus. On the way there, you can see already the peak from faraway, it is really beautiful. From Seongsan Ilchulbong bus stop, walk to the entrance for about 10minutes. You won’t get lost because there will be many tourists also going to the same direction.

Seopjikoji
Walk back to Seongsan Ilchulbong bus stop, take the same bus (Dongilju bus) to Seongsan-eup Goseong-ri bus stop. It’s so easy right, all those destinations above are served by one bus. Seopjikoji is quite isolated. There is no bus stop close to this place. The closest one is Seongsan-eup Goseong-ri stop, yet you still have to take taxi from there (about 3500won). Did I tell you that Seopjikoji is my most favorite place in Jeju Island? It’s really worth it to visit.

Going back to Jeju-si, you have to call a taxi to pick you up in Seopjikoji, because there are no taxis waiting in that place. Last time, I asked for help from an Ahjumma who managed the parking lot. I told her that I wanted to go to Jeju city by bus, and need a taxi to take me to the nearest bus stop who serves Dongilju bus (with a lot of body language). She called the taxi for me.

Either you’re in Jeju-si, or Seogwipo-si, or in the airport, it’s easy to find a bus to Jungmun Resort. It’s the most famous resort in Jeju Island having a complete attractions from natural, gardens, amusement parks and museums, hotels, restaurants and sport centers (including golf). From airport, take airport bus number 600 to Jungmun which costs 5000 won. There are buses from Jeju and Seogwipo bus terminal as well. I don’t know the name of the bus, but you can ask it in terminal itself. The airport bus will go inside Jungmun Resort, but other public buses will only stop on the main road in front of the entrance. There is Tourism Center on the entrance road to Jungmun.

Inside Jungmun Resort, you can just walk from one spot to another: Teddy Bear Museum – Ripley’s Museum – Cheonjeyeon Falls – Jusangjeolli Cliff.

Back to the bus stop on the main road, take any bus to the old Seogwipo bus terminal (ask the driver). That terminal is close to the other attractions: Jeongbang Falls, Cheonjiyeon Falls and Oedolgae. Cheonjiyeon is located between Jeongbang and Oedolgae. So the route should be: Jeongbang – Cheonjiyeon – Oedolgae. Take taxi to go to each place (around 2500won per ride).

There are 2 trails of Hallasan that lead to the summit: Seongpanak and Gwaneumsa. I chose to take Seongpanak trail, and go back via that trail again because there is public bus to go there. From Jeju Bus Terminal, take intercity bus bound to Seongpanak (about 35 minutes, cost 1500won). Take the same bus with opposite direction to go back to Jeju city. The bus runs quite frequently. While the public bus that goes to the other trail, Gwaneumsa, only runs on weekend. Unless you’re really lucky, you rarely can find this bus. Taxi between Jeju city and Gwaneumsa trail entrance would take around 20,000won.

In a nutshell, I think it’s not that difficult to take public transportation in Jeju Island. It’s cheap (but still convenient), and the best part is you can blend with the locals. They are friendly and willing to help the tourists.

28 thoughts on “Transportation in Jeju Island”