Still from Jeju series, about my traveling to Jeju Island in July 2012. Many readers asked me about Udo Island. I think this island deserves a separated post.

How to go to Udo Island?

From Jeju City Bus Terminal, take a bus bound for the East Coast (Dongilju) in platform 4, and get off at Seongsan Port bus stop about 1.5 hours. From Seongsan Port, take ferry for about 15 minutes to one of ports in Udo Island: Cheonjin Port (or also called Udo Port) and Haumokdong Port. Last time the ticket lady gave me ferry tickets that went to Haumokdong Port and came back again from that port. I guess that’s the soonest ferry I could get at that time. I don’t know what’s the difference between those 2 port, but either way the price ticket was the same, 5500 Won including 2 way ferry tickets, Udo Maritime Park entrance ticket and Udo Island ferry terminal entrance ticket. There was no exact hour printed in the ferry tickets (only date), so we’re free to take any ferry throughout the day. This ferry was quite big which can also take cars to Udo Island (with additional ticket).

Arrived in Haumokdong port of Udo Island, there were many vehicles rental places waiting: bike, scooter and ATV. The price varies among rental stores, so you can bargain it. Usually it would be around 5000 Won/hour for bike, 15000 Won/hour for scooter, 20000 Won/hour for ATV. One of the reasons I would like to visit Udo Island was for scooter-ing around the island, and I heard we did not need driving license in that island. But the owner of rental store I went said I needed driving license to rent a scooter. He suggested me to rent a bike instead, but I refused. I only had 2 hours time, biking around the island (from reviews I read in the internet) would take more than 2 hours.

Another easy alternative is take the bus tour. With only 5000 Won, we can go to 4 famous places in Udo Island: Udo-bong (peak), Geommeolle Beach and Dongangyeonggul Cave, and Sebin White Sand beach. I was glad I took the bus tour because it was suddenly raining cats and dogs. Otherwise I would get all wet, and maybe couldn’t finish touring the island. Unfortunately, the bus tour was in Hangukmal (Korean language). The drivers, also as the tour guides, explained about Udo Island and each stopping place in Hangukmal. If you understand Hangukmal, or you don’t care about the explanation, then it’s ok 😀

First stop was Udo-bong. I spent about 1 hour here (because I missed the bus :p). Here was a big ranch where you could ride a horse for 10,000won in 30 minutes, with path leaded to Udo Lighthouse. There were many celebrities pictures riding horse here, including Lee Seung Gi with 1N2D team, and Ha Ji Won. From here, you could see the beautiful Seongsan Ilchulbong. 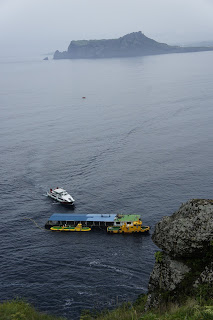 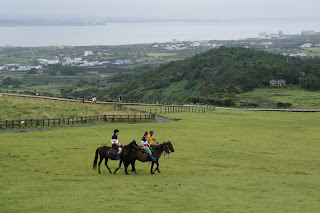 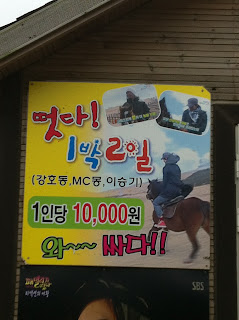 Second stop was Geommeolle Beach, the beach with black sand and rocks, and Dongangyeonggul Cave. This was a spot for diving women. I spent about 30 minutes here. 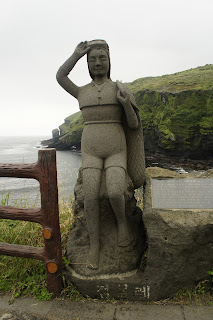 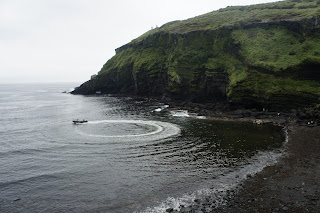 Third stop was some other beach. It looked not interesting so I didn’t stop here and continued to the forth stop.

The forth stop was Sebin White Sand beach or Seobin Baeksa beach that had beautiful white corals. I’d actually prepared swimming suit, but I didn’t swim there because it was raining and the water was really cold (was that really summer??!). I spent about 30 minutes here, then took the bus tour back to Haumokdong Port. 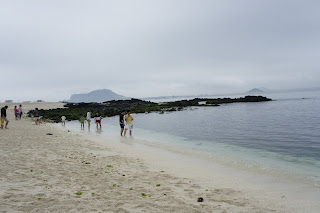 When I got on the bus, the driver collected my ticket, which meant my tour was end here.