Recently I have been involved in Toastmaster. It is an international organization that helps us improve our English, public speaking, communication and leadership skills. There are about 13.000 clubs in the world, including 33 clubs in Korea. If you want to join and to know more about Sinchon Toastmaster Club, you can contact me.

OK, that’s not the point of my posting now (but yeah, you can contact me!). Last week in Toastmaster meeting, I did my second speech project about how to Organize Your Speech. I wanted to present something I know and experience very well. I gave a speech about 3 unique things of Singapore. 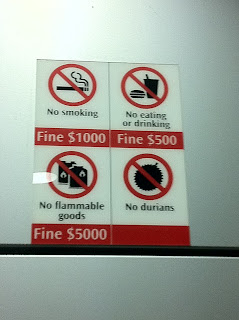 As you know, Singapore is famous for being one of the cleanest countries in the world, thanks to its government’s strict regulations. In the buildings, parks and public transportations, you can find many signs telling people what they shouldn’t do and how much they would be fined if they broke the rules. Some rules are common and can be found too in other countries, but some… are silly. For example:

1. Selling or importing chewing gum
2. Throwing stuff from high rise apartment, because it may kill someone below
3. Lighting up firecrackers without permission
4. Possessing stun gun, pepper spray or toy gun
…and many more

Fortunately during my almost 3 years living in Singapore, I was a good resident, I never got fined. Or I should say, I was lucky to not get caught because I downloaded movies illegally sometimes (don’t tell anyone!). However, I did know some people who got fined when they entered Singapore and brought more than 1 pack of cigarettes. Yeah, that’s illegal too. So, if you travel to Singapore, make sure what you bring in is allowed.

But thanks to these rules, Singapore becomes very safe and orderly. You can walk at night without too much worry.

The main language in Singapore is English, but the signs and announcements are usually in 4 languages, including Mandarin, Malay and Hindi Tamil (corrected by Amudi, hihi). This is because Chinese, Malay and India are the majority cultures living in Singapore right now (I guess soon Pinoy will take over too). Somehow it makes their main language becomes a distorted version of English, which we called it Singlish.

The sentences in Singlish are usually short, sharp and straight to the point, just like Singaporeans. You know, Singaporeans walk very fast. There are escalators everywhere, with speed twice than any escalator in Korea, and they still walk on those escalators.

Anyway, the sentence is short, because they tend to drop unnecessary articles, like to be, ‘at’, ‘in’, ‘on’, etc. For example:

This country weather very hot.
Meaning: In this country, the weather is very hot.

Influenced by Chinese and Malay dialects, Singlish has unique tones and additional particles like ‘lah’, ‘meh’, ‘lor’, ‘ar’, and many more. For example:

This movie no good lah.
Meaning: This movie is not that good. 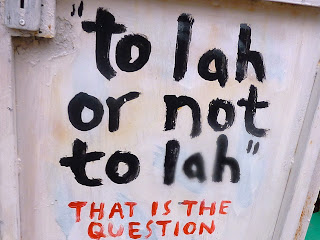 (Maybe here in this posting you cannot get the tones, but it was more understandable when I said it in front of Toastmaster people. They liked this Singlish part so much.)

However, the government has banned the usage of Singlish, and created a Speak Good English Movement campaign. The reason is for Singaporeans to be able to compete and understand other English speakers in the world.

As Singapore is the melting pot of Asia, you can find the wide variety of foods from Indonesia, Malaysia, Chinese, India, Thailand, Philippines, Arab, and many more. Of course it’s not as good as the foods in their own country, but being able to try many kinds of foods in just one country… how cool is that! For example, Hainanese Chicken Rice from China, Nasi Lemak from Malaysia and Roti Prata from India. These foods can be found anywhere easily, especially in an open-air food court called Hawker Center. If you travel to Singapore, make sure to try eating in a hawker center. 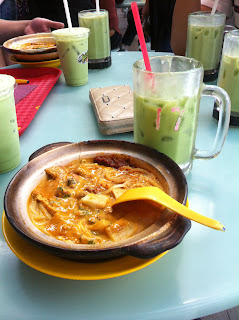 I listed my favorite foods in Singapore in this blog few months ago. Oh, I am so craving those Ayam Penyet Ria, Chili Crab, Cereal Prawn, Sambal Kangkong, Laksa, Hokkien Noodle!

Yes, those are 3 unique things about Singapore in my point of view. Preparing for this speech brought a nostalgic feeling to me. As much as I hate and I am bored with this tiny country, I miss it too. I then listed what I will do when I visit Singapore next time:

1. Stay in Marina Bay Sands and swim in its beautiful pool
2. Spend one whole day in Orchard. I just love this place.
3. Eat all my favorite foods I mentioned above
4. Meet all people I know in Singapore
5. Visit new places. So far I only heard about Gardens by the Bay.
6. Visit Henderson Wave. It’s an old place, but I never visited it when I was there. Shame on me!
7. Zouk Out!! That means I should go to Singapore on December next year then, hemmm…

Oh by the way, I got Best Speaker award of the day for this speech.