As I wrote in this post, I was coming to Wah! Korea Party, and it was yesterday! The schedule was 2-11 PM, but me and my friends arrived there at 4 PM and finished at 10 PM. The party was located in warehouse hall at Scape, near Cineleisure Orchard. That was the first time I went inside Scape, a shopping mall that newly opened last year as part of youth park where young people gather and hang out. Flea market is held there very often. I did feel young again being around that area.

Inside the hall, there were few stalls inside the hall: Traditional Games where we could try a Korean traditional boardgame, Spa Scene where we could have makeover free from Spa Scene, Cyber Online Game where we could play and battle with wii, Photozone and Calligraphy Zone where we could take polaroid picture with a couple dressed in hanbok and have our names written in hangul, Koryo where we could have some drinks (they had soju after 9!) from a-cafela, Buffet Korean foods, and Korea Tourism Organization (KTO) where we could get tourism information about Korea (I directly gathered the brochures for my upcoming trip to Seoul February next year, yeah I know still long time to go!). We could collect stamps in the dedicated passport book from each stall to join the lucky draw (I never been lucky to this kind of thing). There were also some beautiful photos about Korea decorated the hall. With all the foods, drinks, goody bag, and meeting new friends, $20 ticket was totally worth it.

The event passport, with calligraphy of my name 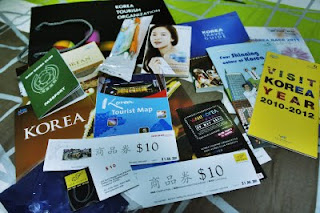 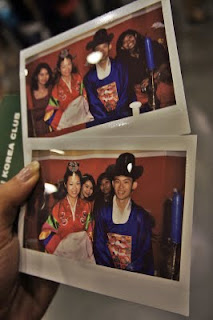 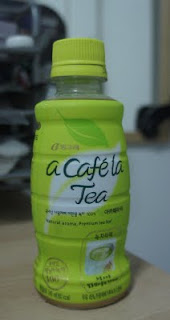 Right: Polaroid pictures with a couple in hanbok.  Left: I like the coffee more than a-cafela tea One of the photographs standing around the hall 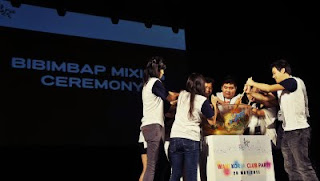 Giant bibimbap mixing by the committee

And then there was kpop battle between representative of SMU, NTU, NUS, All That Korea and Wah! Korea Club. The NUS Quin girls won the award. Next, we learnt some kpop dance during mass dance workshop for these kpop songs: Can’t Nobody – 2NE1, I’ll be back – 2PM, Supergirl – SUJU, Fiction – B2ST. I could catch the movement in first two songs, but then gave up haha, long time not learning hip hop dance. Then, there were some more dance performances from top 3 winners from previous Wah! Korea Club kpop dance contest. 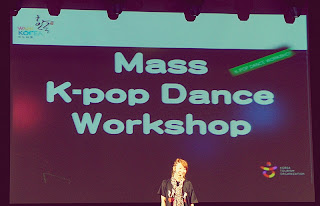 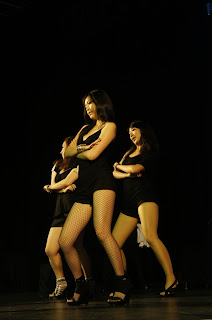 One of dance performances, they started with Nobody But You – Wonder Girls (hawt!)

The party was ended by DJ Buda who mixed some Korean disco/pop songs and made the crowds dancing crazily. I was amazed how the crowds familiar with all those songs (they sang them loudly) and even knew the dance of those songs. They said that this DJ was coming all the way from Korea for making this party, but somehow I know that he is currently living and studying here in Singapore 😛 He is quite good and talented tho, and good-looking hehehe.