We were Strangers, Starting out on a Journey

April 29th, 2009We’re 9 people, flying with JetStar from Changi Airport Singapore to Macau International Airport. Another friend flew from KL, and another one was in the next flight. We’re staying in Ole London Hotel, a nice 2 stars hotel in the city. Macau consists of 3 islands: Macau Peninsula/City itself, Coloane and Taipa. These last 2 islands are already connected by land reclamation. While with Macau city, they are connected by long bridges which are so beautiful to see at night. From airport in Taipa to our hotel in Macau city, spent MOP 80-90 per taxi (up to 4 people).

After putting our stuffs in the hotel, we went out to get late dinner and sightseeing the city. It’s already 10pm, guy from hotel said that all shops at Senado Square are already closed, so we searched for foods nearby. What is Senado Square? I save it for later. Apparently there are many seafood restaurants opened at that hour, but the problem is… we couldn’t understand the menu, all written in Chinese. Speaking part is also hard, they don’t really understand english. Some friends can speak chinese but a little useless, cause they speak Cantonese. So with a little chinese language and much body language, we had our dinner, spent MOP 450 for 11 people. Not bad.

So this is part of Macau city in the night. The road is paved with a wave-patterned mosaic of colored stones, very nice. We’re walking in narrow streets, surrounding by antique shop buildings. It’s like the bigger version of Braga Bandung. 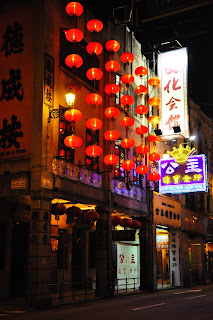 We’re heading to St. Paul’s Ruin. The Ruins of St. Paul‘s refer to the facade of what remains of the Church of Mater Dei. The church was part of St. Paul’s College, which was founded in 1594, the first western-styled university in the Far East. In the fire happened in 1835, the College and church were also burnt, leaving only the facade, most of the foundations and the front steps.

That’s it for 1st day in Macau.

(*)Courtesy to Arie for the pictures. Click the images for bigger view.