What do You Know About AI Arms Race? 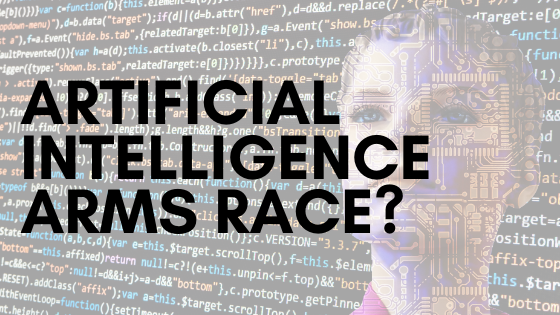 Recently I read an interesting article by Dr. Peter Asaro, What is an ‘Artificial Intelligence Arms Race’ Anyway?. The AI Arms Race phrase is blooming rapidly in the last few years with various understandings, and the article tries to list down each interpretation in a systematic way.

Artificial Intelligence (AI), is a computational algorithm that can program a system to perform specific tasks perceived by human intelligence. This deep learning automation can be observed nowadays in the emerging technologies such as machine learning, self-driving cars, and house-cleaning robots.

How about Arms Race? The Oxford Learner’s Dictionary describes it as “a situation in which countries compete to get the most and best weapons”. Then what exactly is AI Arms Race? Does it mean countries using AI technique as their best weapon to fight other countries? Dr. Asaro discussed 7 definitions of AI Arms Race as specified below.

The AI Arms Race is an Economic Competition

AI was first mentioned by John McCarthy in 1956, and has been studied by scientists since then. It is not a new field, but it keeps evolving and becomes a big trend again with the growing of available data. Creating a super AI system requires determined entrepreneurs, well-trained AI engineers, a supportive policy environment, and most importantly the abundance of data (AI Superpower, Kai-Fu Lee, 2018).

The world leading technology companies like Google and Facebook in the US, or Alibaba and Baidu in China, are today competing mainly for users’ data gathered such as from social media and search engines. Although they seemed to be facing AI battles with other companies within the same country, Dr. Asaro argued that we could look at them from a country’s perspective, where the companies from US and China are directly racing for internet users in Asia, Africa, and South America. This is a metaphor definition because the competitors are not building weapons, but a strategy to dominate the sales and markets.

The AI Arms Race is a Proxy for Technical Dominance

History has recorded various technical competitiveness between countries, such as the space race between the US and the Soviet Union (USSR) between 1955 to 1075, and the industrial productivity race between the US and Japan during the 1970s and 1980s. It continues now with the fears of missing out (FOMO) of several countries in technological innovations, such as wars in 5G cellular network, solar and green energy, and of course AI. The China government, for example, has set an ambitious target since 2017 to become the world’s leader in AI by 2030. This losing concern is related more with economic and political influence, rather than military power.

The AI Arms Race is About Cyberwarfare and Cybersecurity

Cybersecurity is the practice of protecting computer networks and infrastructure from malicious attacks that can steal, tamper or even destroy the data and information. Although it has been used extensively to defend against digital attacks, advanced cyberdefenses with the implementation of AI technology will further secure essential systems of states and firms from cyber attacks. The other way around, AI can also be utilised in developing advanced army of hacker bots to break any cyberdefenses, thus creating a cyberwarfare.

The AI Arms Race is About Weaponizing AI for Social Manipulation

AI can be exploited for disinformation campaigns through social networks to manipulate public opinion by acting as the human-like bots. This micro-robot is usually operated using Application Programming Interfaces (API) provided by the platforms itself, such as Twitter and Facebook. This API is originally intended by those technology companies to allow users to build a software that can integrate with the platform for business and other honorable purposes, for example, to respond automatically to customers’ inquiries.

However, bots have been de-scripted for social propaganda. AI was used as politics by other means and powerful tools to undermine democracy, like the Trump 2016 digital campaign which relied heavily on ad targeting using illegal Facebook data from Cambridge Analytica, a British Public Relation political firm. Sometimes, it even involved more than one country, such as the interfering in the US presidential election campaign in 2016 by the Russian-based Twitterbots.

The AI Arms Race is About Weaponizing AI for Conventional Warfare

This is perhaps the most literal meaning of AI Arms Race, which is building intelligent machines and guns for combating in conventional war (as opposed to cyberwarfare). It generated controversies in controlling these autonomous weapons, such as the Campaign to Stop Killer Robots which was launched in 2013. The United Nations has started to address this fatal issue at the Convention on Certain Conventional Weapons (UNCCCW) on the possible regulation and the limitation of Lethal Autonomous Weapons Systems (LAWS or just AWS). As Dr. Asaro stated in his article, “to ensure that there is always meaningful human control over the use of weapons, and that humans do not delegate the authority to kill to machines, or otherwise abrogate their legal accountability and moral responsibility.”

The AI Arms Race is The Third Offset Strategy

Offset strategies are about counteracting the enduring advantages of possible opponents, commonly used by the US’ Department of Defense (DoD). The First Offset was about applying nuclear weapons following World War II in the 1950s. In response, the USSR enhanced its own nuclear weapons program, surpassing the US’ nuclear capabilities. To offset this, the DoD then implemented the Second Offset following the Vietnam War in the 1970s, by developing technical superiority like precision attack, standoff weapons (missiles or bombs), and stealth capabilities (the ability to evade detection by radars or sensors). In 2014, DoD promoted the development of next-generation AI technologies as part of its Third Offset Strategy, including autonomous platforms (unmanned vehicles) and cognitive technologies. Apparently, China also has its own Offset Strategy to deter the US, and one of them is AI.

The AI Arms Race is About Building a Super Intelligence/AGI

While specialised AI is vastly built and mature, such as speech recognition and face detection, the development of Super Intelligence or also called Artificial General Intelligence (AGI) is still a fuzzy and overwhelming concept. AGI has a wide range of intelligence, mainly cognitive skills such as knowing and perceiving, which can be as smart as humans or even outperform humans’ capabilities. Although it will contribute a lot of strategic advantages like stock trading and science innovation, many people also worry with its risks and uncertainties towards human beings.

This form of smart human is depicted in many popular movies, predicting that robots will live side by side with humans, or even rule and danger humans in the future. Most AI experts think that AGI is coming soon though. Are we ready?

We can say that the AI Arms Race has significant roles in economic, political, and military competition. In order for states excelling in this global race, some policies are recommended. First, the governments should promote and support more Computer Science education, specifically in AI and socio-technology research.

Secondly, the nations should consider their AI strategy thoroughly, whether they need to invest it in economic, political or military purposes, because the consequences will be different. As Dr. Asaro said, “If the real arms race is about economic dominance, then the best AI programmers should be going into industry, and creating consumer and business AI applications”. And finally, all stakeholders (business, political leaders, academic, grassroots society) should work hand-in-hand in addressing negative implications of AI such as personal data violation, fake news, and information manipulation.

1 thought on “What do You Know About AI Arms Race?”