Moslems all over the world just celebrated a big holiday Ied al-Fitr (Hari Raya) 3 weeks ago. During Hari Raya holiday, I went to Aceh again to visit my parents with my husband and daughter. Since there was no direct flight to Lhokseumawe (Lhok), my hometown, we needed to transit in Medan first. From there, we could take another smaller plane for about 45 minutes, or take road trip by bus/car for about 7 hours.

On the flight from Jakarta to Medan, my little daughter (who’s still an infant) cried the whole flight. She did not want to sit, and asked us to hug her while standing in the aisle of airplane. My husband had to stand up for the half of the trip (poor him). All the toys we brought, that usually could distract her, were not working at all. It was a nightmare for her, and for us who felt so sad seeing her screaming and crying. This was not her first flight; she had taken airplane last year but not as drama as this time. Maybe at that time she was still too little to be afraid. Fortunately, from Medan to Lhok we got in the car together with my cousin who lived in Medan and wanted to go home to Lhok too. No flying, no crying tantrums, but she got carsick and bored on the way. But still better than 2 hours in airplane.

We arrived at home in Lhok around 6pm, just on time before breakfasting. Sunset in Lhok was around 7pm, not 6pm like in Jakarta, so on that day I was fasting 1 hour longer than usual. It was a long tiring day, but we had a long rest the whole next day. It was also extremely hot during the day in Lhok, so we couldn’t go out until in the afternoon. During the day I played boardgame with my siblings, and helped to ruin cook Timphan (Aceh traditional cake) for Hari Raya.

We finally went out at 4pm, and it was still super hot, oh my God! Our first stop was Bukit Goa Jepang (Japanese Cave Hill). Been living in Lhok for 15 years, then visiting Lhok 1-2 weeks every year since then, but I never knew about this place before. It was located on the main road Jl. Medan – Banda Aceh between Lhok downtown and Arun. Like its name, this cave was built by Japanese army in 1942, the last Japanese cave before Soekarno declared the independence of Indonesia in 1945. People believe it was used by Japanese army to spy on enemy coming from the sea. The cave is quite small, without bunker, only about 100 metres with some branches and dark scary rooms. Maybe because at that time there was no other visitors except 7 of us, no guards either, so it felt more eerie. It indeed had a scary history, where people involved in Communist Party being killed in 1965. It was also used as a temporary camp for rebels who were being caught by Indonesian army during Aceh Independence Movement (Gerakan Aceh Merdeka / GAM) civil war. This cave is located 100 metres above sea level. 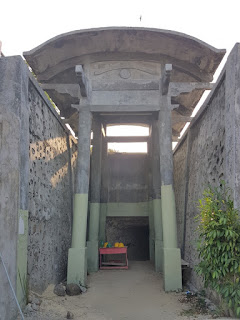 Bukit Goa Jepang, they provided some helmets to use when going inside

Close from the cave, the government has built a small parks to see the nice surrounding views from the top, called Taman Ngieng Jioh which means Looking-Far Park. The name has a literal meaning; from this park we can look far to the sea. When we went there, they collected 5000 Rupiah for carpark but there was no entrance fee to get into the cave and the park. 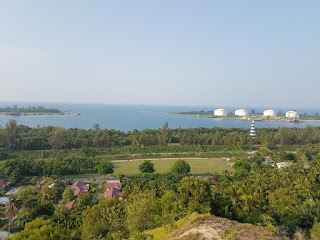 From Bukit Goa Jepang we went to Ujong Blang beach, the most famous beach in Lhok. It stretched quite long with colorful stalls along the beach, giving you many spot options to eat and swim. The stalls usually sell Rujak (mixed fruits with peanuts sauce), Coconut Water, and Fried Noodles. The sea wave and wind was really fresh, calm and not too strong. Since we were fasting, we didn’t go swimming but we had our feet a nice dip into the sea water. Even my daughter, who was usually freaked out with sea wave, seemed really enjoying her beach time. 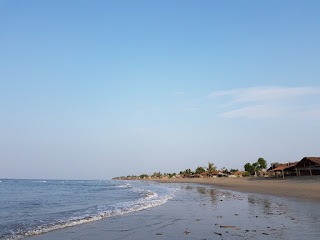 The next afternoon, still fasting day, we went to Waduk Pusong while waiting for breakfasting time. Waduk is a reservoir, and Pusong is the name of area where the Waduk located. Many local people go there for jogging in the morning, or catching sunset in the afternoon while looking at the grand Islamic Center mosque (also one of must visit place in Lhok). The evening time is also crowded with people and food stalls along the road. Since it was fasting, the place was empty, and we just drove around by car. 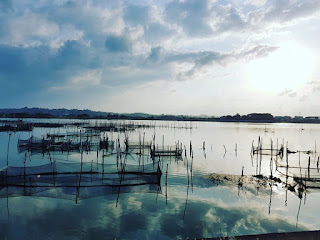 The next day was Ied Fitr day 1. We went to Mom’s relatives’ houses in Lhok and Matang (about 1,5 hour drive from Lhok). On Ied Fitr day 2, we went to Dad’s hometown in Beureuneun, about 4 hours drive from Lhok, and went back to Lhok on the same day, without staying overnight there. On the way home, we stopped at Cafe Socolatte in Pidie Jaya, very near my Grandmom’s house. This healthy chocolate brand is very famous in Aceh. Since long time ago, this part of Aceh has produced raw cocoas usually to be imported. Local people did not have the knowledge to process it into ready-to-consumed chocolate products. When tsunami hit Aceh very hard in 2004, many NGOs all over the world came there to help local people building their life again. They even come into remote area/forest that was not impacted by tsunami, to improve the people’s life. One of them was OISCA Japan who taught these people in Pidie Jaya to process their raw cocoas. Now Socolatte have their own chocolates and products related to chocolate such as chocolate drink, brownies and many more. They have their own cafe beside the big road Jl. Medan – B.Aceh. I tried their chocolates and brownies, they were really nice. But I don’t really like the chocolate drinks both the drink itself and the packaging (just a boring transparent plastic cup). They don’t have yet cafe in other cities in Aceh, but their products have spread the whole Aceh. You can buy it in any souvenir shops in Aceh. 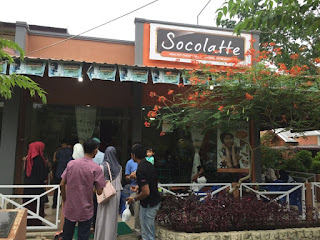 The next day we went for a nice day trip to Takengon! I will write about it in the other post. The next day again, was my last day in Aceh. In the morning we had a nice breakfast in Ujong Blang beach (never tired of this beach while in Lhok). It’s just 10 minutes away from our house. Sometimes my parents walk there during the weekend morning. My Dad bought packs of Nasi Gurih first from Simpang Asmi (the famous Nasi Gurih stall in Lhok) then brought them to the beach. We ordered some drinks from the stall where we seated. Unfortunately the wave was quite strong that morning, so my daughter was afraid to dip into the water.

We flight back to Medan then to Jakarta on that day. It was a nice too short getaway holiday to Lhok, and it felt not enough. I even did not have time to buy souvenirs home, instead I asked my Mom and Sister who were still there for another week or so to buy and bring them to Jakarta for me. I already have in mind some places to visit in Lhok itself for my upcoming trip whenever it will be.

2 thoughts on “When In Lhok”