Taiwan is famous for its mountainous and natural scenery. About 53 times smaller than Indonesia, this country has 9 national parks in total. One of them is located on the northeast side of Taipei downtown, and accessible to visit in one day from Taipei City with public transportation. It is called Yangmingshan, named after a scholar from Ming Dynasty, and Shan means mountain in Chinese (similar to Korean‘s San). The place is good for seeing cherry blossoms, enjoying hot spring, and hiking.

Since I came here in the middle of May, there was no longer cherry blossoms insights. We also did not intend to dip in one of its hot springs, since it was not too cold anymore. Furthermore, hiking was not an option for us who are traveling with a small kid. What we did was strolling around the park enjoying the fresh air and beautiful views. The place is quite friendly for baby with a stroller and elderly with a wheelchair.

Yangmingshan has a lot of scenic spots. The complete list can be seen on its official website, and they are all free! Here I want to highlight 2 of the places.

Xiao means little and youkeng means pit. Its name describes the fumaroles or the holes releasing sulfur on the side of a volcano. The landslide terrain was formed by post-volcanic activity many years ago, and now the volcano was dormant. This breathtaking sight can already be seen from the platform view of Xiaoyoukeng Information Center area, very close to parking lot and bus stop. Once you alight from the bus you can smell the sulfur right away.

For more adventurous experience, visitors can take the hiking trail toward the summit about 1120 meters above sea level, the highest peak of Taipei City. Another trail leads to another recreation spot in Yangmingshan called Lengshuikeng, which means cold water pit, and it is the coolest hot spring in the area where many people usually dip their foot into the hot water for relaxing after hiking. There is also Arrow Bamboo Trail, a small trail located just beside information center to reach a higher platform view. As the name indicated, the path on this trail is surrounded by very pack of bamboo plants. I read an article somewhere that Yangmingshan National Park has venomous snakes, would they be hidden among those bamboo plants? Despite that fear, we were quite curious about that bamboo trail. As long as we keep walking on the provided lane and not wandering off into the bushes, I think we will be safe. Since it involved climbing stairs, I and my husband alternately took round to walk this trail while the other was with our kid in the cafe below sipping a cup of coffee in that cold fresh air. Reaching the deck above, the scenery looks more beautiful and the air feels windier. Visiting Yangmingshan even in Summer, one should prepare a jacket and other warm clothes. 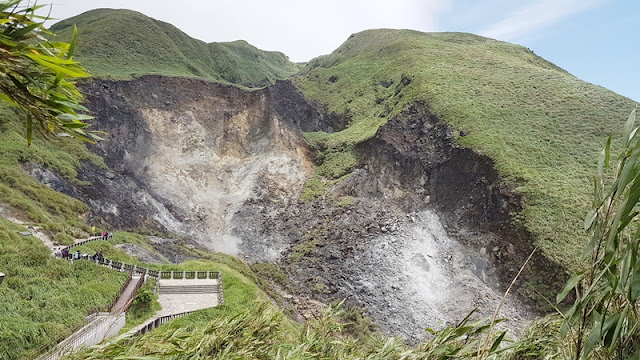 Have you ever seen Teletubbies children TV show which was booming about 20 years ago? There were 4 cute creatures hugging and running happily on a hill. I was about to run and dance like them when I see Qingtiangang. It is a veeeery wide grassland, home to many big cows. The flat terrain was formed a long time ago by the lava movement after the volcano’s eruption. There are circular trails to walk around the hill, and trail which connects to another Yangmingshan spot called Juansi Pubu (Juansi Waterfall).

How to Get There

There are few ways to get to Yangmingshan National Park. First one is by minibus S9 from a bus stop outside Beitou Station. This is one of the Taiwan Tourist Shuttle routes called Beitou Zhuzihu Route. This bus stops in few spots of Yangmingshan outskirt spots such as Yangmingshan Flower Clock (no #4 in below map), Grass Mountain Chateau (no #5 in below map, this is a former residence of the late president Chiang Kai Shek) and Yangmingshuwu (no #8 in below map, this is a former guesthouse or summer house of the late president Chiang). Every time you get on the bus, you need to pay NT15 by cash or EasyCard. This bus only reaches until Zhuzihu (famous with Lily flower gardens). To go further deep into Yangmingshan park such as Xiaoyoukeng and Qingtiangang mentioned above, we have to change into minibus 108 either from Bus Transit Station (no #6 in below map) or from Zhuzihu bus stop (no #9 in below map).

Minibus 108 loops around the park from Bus Terminal to Zhuzihu to Datun National Park to Xiaoyoukeng to Lengshuikeng to Qingtiangang to Juansi Pubu then back to Bus Terminal. The bus has frequency about 30 minutes during the weekend and 40 minutes during weekdays from 7am to 5.30pm. Visitors can purchase one day ticket for minibus 108 cost NT60, saving you money if you stop more than 4 places. You can also opt to pay separately by cash or EasyCard when you depart in the minibus, which cost NT15 per trip.

Another way to reach Yangmingshan National Park is by taking bus 260 either from Taipei Main Station, Jiantan Station or Shilin Station. From Taipei Main Station, the bus will pass Shilin Station but many people prefer to take Metro to Shilin Station first, then continue bus 260 from there because taking Metro is faster than bus duration. However, it would be harder to get a seat if you get in the bus from Shilin, because this route is quite crowded (even though it is a normal bus, not a minibus). Yangmingshan Bus Terminal is the last stop of this bus so you will not be confused when to alight, not like the minibus S9. From Yangmingshan Bus Terminal, the visitor then can take minibus 108 to go around the park.

Remember that the minibus 108 is going circle one way only and has frequency 30-40 minutes between the buses, so plan your stops appropriately. For example, at first I planned to visit Zhuzihu, but I missed the stop and directly went to Xiaoyoukeng. I thought I could take the opposite bus back to Zhuzihu, but no. I would need to finish that one circle first then take another round. It was already quite late and I was not in the mood anymore haha.

Which one did I take to Yangmingshan? Both S9 and 260. I tried taking minibus S9 when going there and then taking bus 260 when going back. Although it is designated as Taiwan Tourist Shuttle, I find S9 is not quite tourist friendly. First, there are a lot of local people taking this minibus (well, they have the rights tho). Second, the driver can not speak English and no notification in English. Third, it is a crowded route but only runs every one hour, therefore really really packed inside. I chose this bus to go to Yangmingshan because I planned to stop at several places before reaching Yangmingshan Bus Station, but in the end, I did not alight at any of those places because it would be difficult to get a place into the next bus later on. Going back from Yangmingshan, I took bus 260 because I wanted to visit Shilin Night Market.

If you still have spare time before/after visiting Yangmingshan, you can combine the trip with this attraction places.

As you can see from Beitou Zhuzihu Route map above, there are several interesting places in Beitou area such as Plum Garden, Geothermal Scenic Area, and Mituo Temple.

Tamsui or also called Danshui is a seaside district in the north of Taipei. You can visit Fort San Domingo, take a boat ride between Fisherman’s Wharf and Ferryboat Wharf, stroll along Tamsui River by Youbike (Taiwan bike sharing system) or try local delicacies in the old streets.

Shilin is the largest and most popular night market in Taiwan where tourists can enjoy variants of local snacks and buy souvenirs.

Yangmingshan is definitely worth a visit. It is my husband’s favorite place among all places we visited in Taiwan, and my second favorite after Jiufen (onto the next post). Visitors can spend the whole day to explore the park, and those who feel enough to visit only 2-3 spots in the park can go to other tourist places nearby. I do envy Taipei people because they live in a big city but can enjoy the scenic mountains easily from the city. Not like Jakartans who need to take few hours driving or airplane to reach an iconic refreshing place. Yangmingshan National Park is equipped with good facilities for visitors from children to elderly, making people able to exercise and appreciate the nature easily.