It has been almost 2 months since I arrived in England in the middle of September and started living in Brighton. Brighton might not be known so much by people outside the United Kingdom (UK), and some people might even mistaken it with Brighton of Melbourne, Australia. Located on the seaside, Brighton is a small resort town about an hour train ride to the south of London, which is a favorite holiday destination for Londoners. Brighton and its neighbor Hove are towns, but together they form a city called Brighton & Hove (yeah, easy) started from year 2000. It is going to be my home for the next one year (minus 2 months) while I am studying a Master Degree in one of the universities in Brighton. So, what can I say about this new home of mine?

The first thing I like in Brighton is its laid-back atmosphere. Like the usual vacation town, people here are so relaxed and easy-going. Minority and foreigners, including Moslems, are very welcomed. My husband admitted during his 2 weeks visit here that everyone we met and encountered was all very friendly and helpful. It was also my first impression when I started seeing all the snail sculptures around the town. Those artsy snails are part of Be More Snail campaign which invites people to take more enjoyment every day, whether that means taking the time to eat lunch away from your desk or wholly engaging with your child’s update on the day or enjoying a long soak in the bath. It is about slowing down and fully experiencing what is happening in the here and now; making for the things that make you happy. This is actually one of the things I am looking for by going away from the hectic Jakarta city. Brighton is not crowded, but I can get anything here (Lush: checked, Primark: checked, free shipping Amazon: checked.. ok I’m good). I have been dreaming to live in a pretty small town but not conservative like this. Like the picture I submitted for the Photo Competition in my university with a theme “First Impressions of the UK” which I won as the 1st winner (achievement of the month, yay!): we are observing the new city we just moved in a snail’s pace because there’s so much beauty. 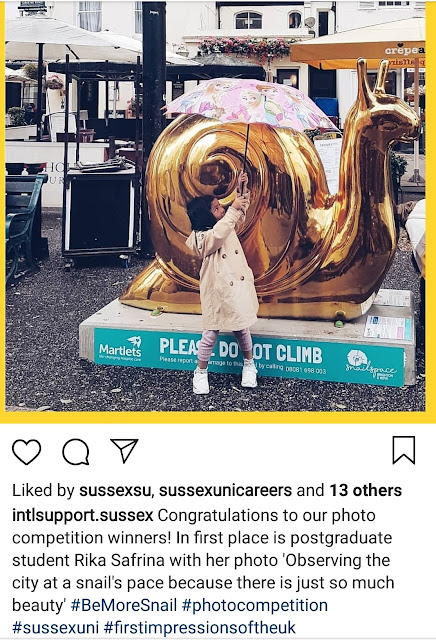 When I said not conservative, it includes the technology used around the city. Maybe not as sophisticated as London but Brighton is a cashless society too. On the first time we rode a train to the university, we found the ticket machine only accepted debit/credit cards, not cash. We then asked a lady in front of us if she could buy the tickets for us using her card and we paid cash to her. She helped us right away. The total fare was £7 but I gave her £10 because that’s the smallest note we had at that time and she did not have any change because like everybody else she always used cards and rarely had cash with her. Apparently, she was working in my university, so we changed phone numbers and met again on the campus a few days later to give my £3 change. This is also an example of my first point above on how people in Brighton are so nice! Back to tech, Brighton & Hove does not need subway/metro, but the public buses are very convenient. The bus tickets can be bought online via mobile apps and be shown directly to the bus driver (no need cards). Some large bus stops have an updated arrival time screen. Free wi-fi connection can be found everywhere in public spaces like buses, stations, and libraries. There are 15 public libraries around Brighton & Hove where we can borrow books in one library and return them to another library using the same library card. Every library has its own children section with educative toys and books which is so amazing. Some chain restaurants like Burger King, Starbucks, and Costa put passcode system on their toilet so only customers who make a purchase can use it. Not so friendly for a parent like me whose kid can ask for pee/poop suddenly wherever she goes, but (I hope) you get what I meant by high digital usage in Brighton.

The third thing I like about Brighton is the nature! You can see the sea and hills in one frame. Personally, I am not too fond of Brighton beach because I cannot walk barefoot on the pebbles and the cold water. Beach is supposed to be warm and can be dipped in, and nothing beats beautiful sand beaches in Indonesia. However, the hills and parks here are amazing with many Teletubbies hills. Over 40% of Brighton & Hove is inside South Downs National Park. The rest is covered with buildings and roads but still surrounded by a lot of trees and grass. Maybe because it is fall season, so I am more interested in parks. I will not be tired of seeing those stunning colorful autumn trees, something that I cannot see in Indonesia. Moreover, there are many free parks and gardens in every neighborhood, with most of them have the kid playground section. Those splendid parks and playgrounds also cannot be found easily in Jakarta. Enjoy it while it lasts because it never does.

Of course, nothing is perfect, neither Brighton. The first thing I don’t like is the high living cost. Living cost in the UK, in general, is very expensive among any countries in the world, just look at their Pound Sterling rate. The UK government stated that minimum living costs in London is £1265/month and outside London is £1015/month. They only differ London and outside London, but apparently, there are “middle-class” cities outside London which are more expensive than other cities although slightly cheaper than London. Brighton is one of them. For example, renting a studio apartment in Brighton can cost £700-£800/month, while studio in other cities like Leeds, Birmingham, and Liverpool cost half of it about £350-£400/month! It is also the same case with renting a room. So, imagine if you receive a scholarship with the same amount, students in Leeds can save more than students in Brighton. Sometimes I wonder and have a small regret why I chose this university in Brighton without doing research on the living cost first, but this already happens, and the life must go on. There are more other good reasons to be happy living here that outweigh this disadvantage.

The second thing I do not like about Brighton is its lack of old architectures. When I said old, I meant really really old like from 10th-12th centuries. Before coming here, UK was always the first country to visit on my bucket list. Why have I been traveling to 18 countries but never once traveled to my first bucket list country? Because I wanted to live here for at least one year, not just for holiday 2-3 weeks. When I thought about the UK, I imagined its medieval buildings like Hogwarts. However, Brighton does not have that. Sure, it has that magnificent Royal Pavilion from the 17th century with domes and minarets like an Indian-Islamic style, it is extremely gorgeous but personally, I think it is not too English. The oldest landmarks I found so far are St Andrew’s Church Hove from 12th Century and St Peter’s Church Preston Village from 13th Century. Nevertheless, Brighton, which started to develop in Regency era onwards, has a lot of charming buildings in Regency (1811-1820), Victorian (1837-1901) and Edwardian (1901-1910) styles that can still please the eyes.

I hardly can find the third point I do not like about Brighton (so it would be fair 3-3) but I give up. I am beyond grateful to be living here now. As my favorite lines from Dr. Seuss “Oh The Places You’ll Go” book say:
Somehow you’ll escape
All that waiting and staying
You’ll find the bright places
Where Boom Bands are playing

Somehow I escaped all that fighting and waiting for the schools and scholarships, and I found my bright town (Brighton).

9 thoughts on “About Brighton”