This is still the series of my trip to Aceh on last Ied al-Fitr. I know, it’s too late already ya hehe I just had the time to post it now.

Hello, Sabang! I really have a good memory on this island 7 years ago, and finally I had the chance to visit it again, now with my husband and daughter. Same as last time, this time I planned staying there for 3 days 2 nights. But this time the port was more crowded because of holiday. Ferry tickets and car rental in Sabang were more expensive than usual. That’s why many people would like to bring over their own car using slow big ferry (around 2 hours trip), including us, but the queue was too long. Luckily we could still get the fast ferry (around 45 minutes trip) tickets. Other than by ferry that crosses few times everyday, Sabang also can be reached by small airplane from Kuala Namu (Medan) 3 times a week.

We crossed the sea from Ulee Lheue port in Banda Aceh to Balohan Bay in Sabang in the morning around 8am. It is better to take morning ferry when the sea is still calm. I heard afternoon ferries often canceled the trip because of the weather. Before noon we have arrived in our accommodation Casa Nemo in Pantai Sumur 3 and taken rest for a while (because we woke up quite early that day to get to the port). We already rented a car and a driver for the whole day (car rental in Sabang usually must comes with driver), but the beach view from the was too nice that we just had lunch there and enjoy the view. Until around 3pm, we finally managed to get ourselves out of the hotel to walk around the island. 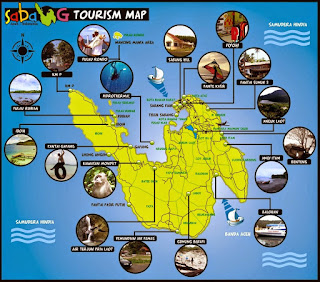 Let’s talk administrative first. Kota Sabang (Sabang town) is located on the northern tip of Sumatra Island, and the most western part of Indonesia. The city is famous in Indonesian song called “Dari Sabang Sampai Merauke” (From Sabang Until Merauke) that tells about this country lies from Sabang town as the western most point and Merauke town as the eastern most point. Kota Sabang consists of 5 island: Weh Island (the biggest and the only island that can be lived), Klah Island, Rubiah Island, Seulako Island and Rondo Island. Weh Island is a mountainous and active volcanic island. My planned was to cover the east part of Weh Island on the first day, and the west part on the second day (including Rubiah Island).

So, our first destination of the day was Benteng Jepang or Benteng. From Sumur 3, we went along the beach line road to the east. From the carpark, we had to walk up to Benteng about 300meters. Benteng is a bunker built by Japanese Army when they occupied Sabang in 1942. It was located on the high hills with strategic position so they could look up the enemy coming from the sea. After decades, the bunker still remained there sturdily with some parts are ruined, and the view up there was amazing! We could see Anoi Itam beach from the top. Anoi Itam in Aceh language means black sand, just like the beach itself that has black sand. 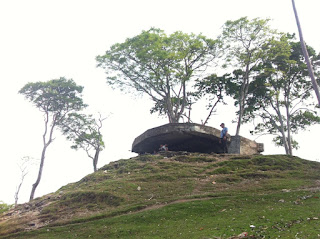 Japanese bunker on top of the hill 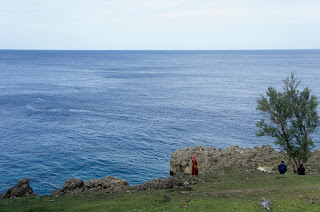 Sea view from the bunker

From Benteng, we went down along the beach road then stopped by on one spot, which was the corner of this island, because the view here was amazing. We could see many road bends going down, and Balohan port where the ferry from Banda Aceh stopped. 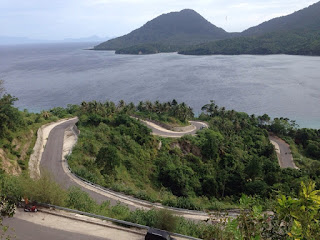 We stopped at one point to see this magnificent view 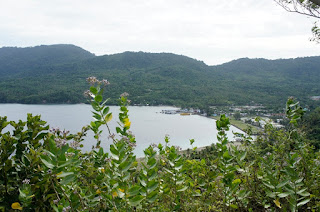 From there, we went to the center of the island towards Jaboi Volcano Crater. The mountain was still active, with many small hot spots expelled sulphur gas. From the car park, we walked through the forest for about 800meters until the first open space with many small hot spots. Further down we could see the crater, but we did not go further much because we went there with our parents and the walking path was quite challenging for elder people. The driver then took us to see the nearest hotspring which got its hot water source from Jaboi Volcano. We did not prepare any bathing gear, so maybe next time ya. They say it’s quite refreshing to take a bath there after an exhausting day. 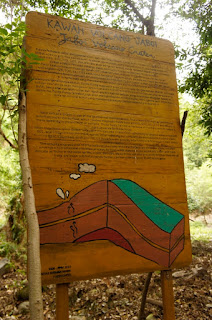 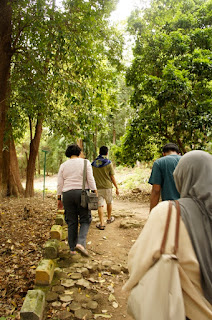 The path towards the first spot of Jaboi Volcano, not steep and easy to walk Even in this first spot, we could smell strong sulphur

Next we went to the city. On the way there, we stopped at one point where we could view the beautiful Klah Island. This small island was located on the bay of Sabang island or Teluk Sabang (see map above). If the sea water withdrew, they say we could just walk from Sabang island to Klah island, because it’s not deep. Well we did not go there and did not know what’s inside this island, but they say there were lighthouse to guide boats and ships around Sabang island, and some cottages from tourist. This island is one of a good spots for fishing, snorkeling and diving. 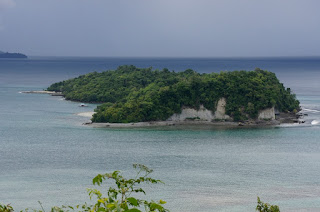 Continuing our journey to the city, we went to Sabang Fair where local people usually gather in the afternoon to see sunset. It’s located just beside the sea with a nice view and playground for children. Unfortunately, as you can see from Klah Island picture above, in that afternoon the sky was getting dark and it was about to rain, so Sabang Fair was empty. We then went to the city center where the shops were, to buy personal necessity, drinks and foods to stock in the hotel. We thought of going back to the hotel first at this 6pm and coming back again to the city later in the evening for dinner, and hoped the rain would be stopped by then. But the rain wasn’t stopped and we were also too lazy to go out again from our comfortable rooms, so we sent out our young and strong teenagers to the city with our rented driver to buy dinner for us.