Another Lembang Trip in 2016

There are too many attractions in Lembang that keep Jakartans coming back there. We just went there last October but one visit was not enough. Therefore we were definitely excited when getting wedding invitation from a friend that was held in Lembang last December. Another reason to go to Lembang, yay!

This time I asked my Mom and Sister to come along with us too. I went out from my home around 5am to pick up my Mom and Sister first, then we started to hit the toll road around 5.30am, and arrived in Lembang around 8am, like last time. We wanted to visit Farmhouse first but the gate had not opened yet. While waiting it’s opened, we entered a Batik shop just besides Farmhouse which already opened at that time, and relaxed a bit after 2,5 hours trip from Jakarta.

Around 9am, we finally went to Farmhouse. I thought after opening 1 year, this place would be less crowded now, but oh boy, it was still packed with visitors, which is a good thing for the owner but not really enjoyable for the tourist. Fortunately we came very early so we got a spot to park our car in the parking lot inside. If it’s already full, the vehicles are usually parked in some additional parking lots outside Farmhouse which is quite far. The entrance ticket is Rp.20,000/person (get free milk) and Rp.5000/vehicle. It’s opened everyday from 9am to 8pm.

I understand this place is crowded because inside there are many interesting spots to take pictures: European style building, Hobbit House, Love Locks, small waterfall, cute cafes and animal farms. Visitors also can rent a traditional Dutch costume for about 2 hours and walk around this place with that heavy clothes. Kids will love to see and feed animals like rabbit, sheeps, cows, parrots, chickens and even iguana. 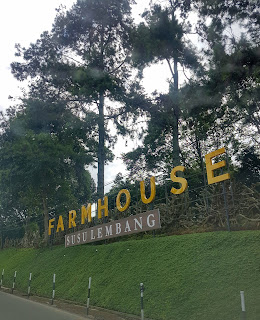 After Farmhouse, I planned to go to Dusun Bambu for lunch but apparently the usual big roads to go there was closed due to landslide and the alternative way was small and so jammed, so I changed the plan to go to Floating Market instead. Floating Market was not really a new attraction place anymore in Lembang, but we had a really good time there more than in Farmhouse. Maybe because it’s less crowded. The ticket fare is Rp.15,000/person, gets one free drink (soft drink or coffee). Many people changed their free drink coupon in the entrance, but we changed it later in the floating foodcourt while having lunch. Why floating, because each seller is selling foods in a boat on the water. You can find many traditional foods that are very delicious and quite cheap. To purchase the foods, we had to buy coins in the cashier then bartered those coins with the foods from the sellers. The coins could not be refunded anymore, so better to purchase them as necessary and used them all.

This place has a beautiful lake inside where visitors can purchase tickets to take the boat to go around this lake. From the floating food court, we can see nice view of mountains in the background. What a pretty lunch! There is also some huts in the middle of paddy fields as eating place, like a Sundanese. Other than boats, there are other spots to kids attractions such as train ride, train miniature museum, rock garden and feeding fishes, of course with additional tickets.

From Floating Market, we went further to The Lodge Maribaya or also called The Lodge Earthbound and Park. This place is really happening right now especially for young people. Here visitors can take their picture on Sky Tree, Zip Bike or Swing with cliff and pine hills in the background. A little bit adrenaline rides but I guess they are safe. These rides in The Lodge Maribaya, especially Sky Tree, are really famous nowadays, that’s why the queues are very long. I was brave enough to take the ride but not patient enough to wait in the queue hehe. So we just walked around this place enjoying the fresh cool air and nature surrounds. Entrance fee is Rp.15,000/person gets free soft drink, excluding the rides tickets. The road to go there was quite challenging, some parts are not yet asphalted and also narrow, so you should be careful.

We finished walking around The Lodge around 4pm and it’s time to check-in to our hotel in Panorama Lembang. Traveling with small kid (plus a grandma) should be easy and slow. Do not make the kids too tired with full agenda, because if they are cranky we would not enjoy the holiday at all. We took a shower and got rest until after sunset (Maghrib), then we went out again to find some things to eat for dinner.

At first I would like to have dinner in Dulang Resort and Resto which people said it has a nice view. We tried to follow Google Maps to go there but got lost somewhere in dark and quiet village. We then found the way but it was so steep, narrow and dark. We decided to look for another restaurant. In my last trip to Lembang, I had a meal in Saung Pengkolan 1, a Sundanese restaurant. This time I was going to Saung Pengkolan 2, the other branch that is located about 10km further up from Saung Pengkolan 1. Pengkolan means turn/curve which suits the location of Saung Pengkolan 1, but apparently not for Saung Pengkolan 2. The second resto is on a straight part of the road, not on the curve part. It was also not big and not having nice view like the first branch. There were not so many people when we ate there and most of the meals in the menu were already finished.

That is the end of our first day on this trip. In fact, that is also the end of story that I can share in this post. Because, on the next day we spent a long morning in our resort, then my Husband, Daughter and I went to our friend’s wedding while my Mom and Sister walked around De’Ranch which I recommended it to them from my previous trip. After we bought some souvenirs in local shops then we’re off back to Jakarta around 2.30pm since the way back was always jammed.

See you again, Lembang! I still have a list of places to visit in you.

Read also my review of the hotel we stayed in Lembang during this trip.